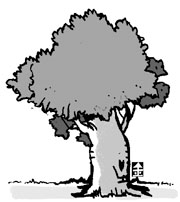 China’s Warring States Period and the Spring and Autumn Period were times of struggle, immorality and all kinds of conspiracies and wicked plans.

However, in the midst of all this turmoil, the virtues of sincerity and faith remained intact. They were chaotic times, but even then, if trust was missing in the political arena, politics between the king and his subjects, or the government and its people, would not properly play out.

In 361 B.C., Shang Yang was appointed by the king of the Qin Dynasty. His mandate was to build up faith and trust among the people.

Two years later, he became the prime minister, and declared, “I will reward those who plant trees at the southern entrance to the northern gate.”

However, the people’s response was cold. “Will he really give us money for planting a tree?” they questioned in disbelief.

While people were gossiping among themselves, someone stepped out in faith and planted a tree at the northern gate. As promised, the prime minister rewarded him.

And from that moment people began to heed government orders.

His reforms were fully implemented without opposition, and the Qin Dynasty grew powerful enough to control most of ancient China.

Building faith is crucial in ruling a country. Without trust, not only are orders disregarded, but it is difficult to gain the people’s support. Without trust, a leader must forfeit his rule.

The Lee Myung-bak administration is failing at building people’s trust.

A recent example is the so-called parachute appointments of Lee’s buddies to high posts at public corporations. Although he severely criticized the former administration’s ideology-based nominations, Lee seems to be walking down exactly the same path.

He appointed or plans to appoint former lawmakers of the Grand National Party, Ahn Taik-soo and Chung Hyung-gun to public corporations such as the Korea Credit Guarantee Fund and the National Health Insurance Corporation. Clearly they are being rewarded for their loyalty to the president.

Will public sector reform be possible with such rampant cronyism?

Will it be possible for Lee to achieve his reform plans while he himself is tearing down the trust of the people?

The public perception of the government is already unfavorable, due to failures in personnel appointments in the cabinet and the Blue House.

If faith is lost, then there is no future for the government.