Puchon film czar tries to balance the mainstream and the fantastic

Puchon film czar tries to balance the mainstream and the fantastic 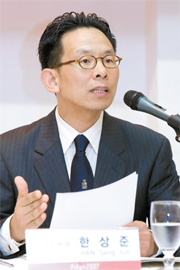 Han Sang-jun is the former programmer of the Pusan International Film festival and the current director of the Puchon International Fantastic Festival. In both capacities, he tried to meet the demands of the mainstream audience and keep the festival’s integrity as sharp and edgy.

Certainly from last year we felt that public reception has settled down. We constantly check film blogs and ticket reservation rates to test the water, and it almost feels like Puchon’s audiences have changed over the past three years. We feel that very strongly from our audiences. No one seems to recall the past.

You’ve had some struggles in terms of positioning the festival from an event for hard-core cinephiles to a broader civic venue with a popular appeal. Is the balance shaping out alright?

Well, it’s true that film festivals generally target cult film fans. But I found audiences at Puchon were a bit different from those at Pusan. Both sets are cinephiles, but I think Puchon audiences have a wider spectrum of taste. They’re more like trendsetters of genre films, probably because the films we offer are more industry-oriented than for auteurs.

They exist within the frame of horror, fantasy and science fiction. We expanded this idea to set up NAFF [Network of Asian Fantastic Films], a project market where Asian directors of genre films find potential investors and co-producers, this year.

The idea of the market is unique. It establishes a system for Asian genre films. It still keeps the festival’s integrity, because we will stay within the bounds of fantasy, romance and horror. I think it will provide a vantage point for the festival’s repositioning.

And for a film festival of Puchon’s scale, it should be able to accommodate both the needs of cinephiles and the other audiences.

Too many. The animated documentary “Waltz with Bashir” (the opening film) is a very important film. A retrospective of Korean spy films from the 1960s is significant. It’s an area that has never been discussed in academic circles. But those films encapsulate the country’s social values at that time.

If you consider yourself a cinephile, I would recommend the early Japanese films made by Nikkatsu, especially “Priest of Darkness” by Sadao Yamanaka. It’s one of the three remaining films out of 12 by the director. “How to Get Rid of the Others” is a remarkable Danish film, which reminds me George Orwell’s “1984.”

Does the city government involve itself in film selection?

That was a primary concern when the new staff joined three years ago. We needed to secure autonomy. So we redefined our roles and position. First we made clear that we create the festival program, and the city was our key sponsor. We treated the city government as we treated other sponsors. We tried to incorporate their needs in developing the city’s film industry. Then life became smoother. We no longer stood on opposite ends.

How do the ticket sales look so far?

We just checked this morning, and 53 films are sold out [there are still seats reserved for site visitors]. A success is when the sell-out rate of a festival exceeds 40 percent. We are close to that figure at the moment.

You were a programmer (for Pusan International Film Festival), an author of several books and a lecturer. How does it make you a festival director?

I was concerned. I believed that a festival programmer was the best job you could get, traveling around, watching films and meeting interesting people. Now, I feel like I’m almost working on the farthest frontline, pulling out all the knowledge and resources I’ve created.

It’s just a completely different role. It’s not as subtle or refined as the other jobs. But personally I’m very happy now. I am one of the first in the office every day.