Children from a kindergarten surrounded by lotus flowers at Seodong Park, Buyeo. By Lee Ho-jeong

The lotus has long been associated with enlightenment and Buddhism in this country.

No matter how often you see the flower in full bloom, the feeling of enchantment remains. It’s an amazing sight to watch the cycle of a lotus blossoming at the crack of dawn and fading as the sun sets.

Buyeo, a small town in South Chungcheong, may not be everyone’s ideal spot for a summer vacation. But go at the right time of year, which is now, and there is possibly no better place in Korea to enjoy the beauty of nature.

To the people of this small town, the lotus is more than just a flower floating on a pond. It is strongly redolent of their identity and history.

Many artifacts dating back to the Baekje era two thousand years ago were decorated with lotus designs, from tiles on the walls of royal tombs to the base of a famous wooden incense burner.

Buyeo, the former capital of Baekje, is holding a lotus festival starting today through Aug. 3 at Seodong Park, which is about 1 kilometer (0.62 miles) south of the town center. 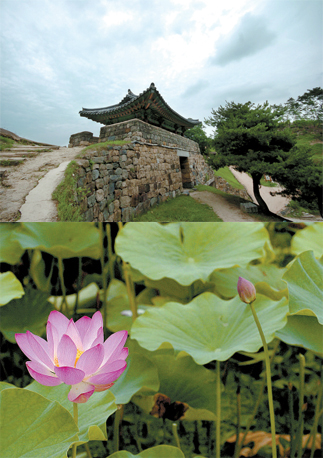 This year is the festival’s sixth anniversary and a variety of lotus flowers will decorate the ponds.

It doesn’t cost you anything to enter and you can while away an afternoon here, walking along the narrow paths that separate the different ponds.

Some are pink, others are white; some are short and there’s one with a long, stretched stem.

The center of this area, a spot that’s hard to miss, is Gungnamji, a pond that has a traditional Korean pavilion called Poryeongjeong standing like a lone lotus in the middle. For many, the scenery here encapsulates the perfect image of an East Asian landscape.

The reddish wooden structure and traditional tiled roof look very different from other pavilions in the country.

From afar, it looks like a painting. The curved bridge, the only way to get to the pavilion from land, looks like it was painted with a single stroke from a calligraphy brush.

Around the edges of the pond, the hanging branches of the willow trees gently touch the water.

The only drawback is the water fountain that shoots up from the pond. 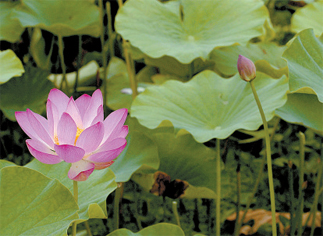 It doesn’t fit in with the overall picture and it chips away at the overall authenticity of the area. Take the fountain away and there would be a far more serene and harmonious atmosphere.

Gungnamji isn’t just any old pond. Historians believe it was once part of a Baekje palace. The name Gungnamji literally translates as “a pond in the south of a palace.”

The pond and the park are mentioned in “Samguksagi,” a historical chronicle published by Kim Bu-shik in 1145 during the Goryeo Dynasty (918-1392). 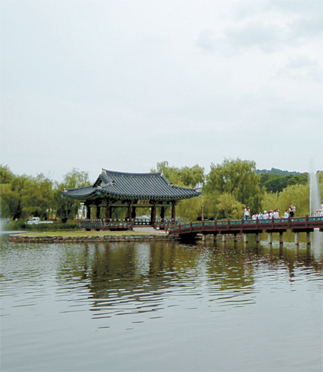 Samguksagi recorded the history of the three kingdoms Goguryeo, Baekje and Silla and the time before.

According to Samguksagi, Gungnamji was built in the 35th year of King Mu’s reign. It also states that the pond were artificially built and originally covered an area of 99,000 square meters (1,065 square feet). Sitting under the roof of the pavilion and listening to the water in the pond, I felt an overwhelming sense of peace. The heat of the summer seemed to drift away.

Gungnamji is also a great place for kids. Although the water in the pond is murky, just under the surface you can see the fish and turtles that live in the pond.

They are more visible from the bridge near attached to Poryeongjeong. During the 17-day lotus festival, a number of events are scheduled for visitors.

Unlike other tourist destinations in the areas like Boryeong, a neighboring town that will be celebrating its mud festival until the end of this week, Buyeo isn’t decorated with flashy neon signs or pockmarked with high-rises.

Instead, this town seems slow and sleepy.

Tranquility is the general mood of this neighborhood.

“Here buildings are regulated to be built less than five stories-high,” Kim said.

She said construction was highly regulated in the vicinity, because many historical artifacts are dug up.

In fact, if you go there, you might even stumble across an excavation in progress.

If you want to learn more about Baekje, there is a museum not too far from the lotus festival locale.

The Baekje Historical Museum, displays replicas of original artifacts, giving you a glimpse of the culturally affluent ancient kingdom.

One of the highlights is a sitting Buddha statue. An entire tour of the museum takes about an hour.

The Baekje Kingdom had a huge influence on Japan, so great was its cultural diversity and creativity. The two nations had friendly trade relations, and Buddha statues and gold earrings similar to Baekje designs have been found in the neighboring country.

The Baekje History Restoration Site is an interesting diversion. Although it is still under construction, you can see it in the backyard of the museum.

The building takes the shape of a traditional Baekje building with two wooden towers standing in the front of the main building.

Staff at the museum said the restoration site is scheduled to be opened to the public in 2010.

Visitors will have the chance to experience what life would have been like during the Baekje kingdom.

Buyeo isn’t the only neighborhood with a strong historical connection to Baekje. Less than an hour’s drive north is Gongju. The town was the second capital of the kingdom for 64 years until the kingdom moved its capital to Buyeo.

Like Buyeo, Gongju is small. But a significant figure of the Baekje kingdom is buried here.

The tomb of King Muryeong lies near downtown Gongju. Unfortunately the inside of the tomb hasn’t been open to the public since 1997.

According to Lim Jae-joon, culture tourism narrator at the Gongju office, the tomb was sealed off because it was getting damaged. But historical artifacts that were retrieved from the tomb are now on display at the Gongju National Museum.

Items include original tiles found from the tomb, royal jewelry and a statue of a mystical creature that looks like a small pig with a single horn. This creature was believed to guard the tomb from intruders.

The discovery of the treasures inside the tomb in 1971 was a boon to historians.

Prior to the find, there was a lack of evidence to back up what was recorded in historic publications concerning the wealth and breadth of Baekje’s achievements in art and culture.

There are another sixth tombs resting beside the king’s tomb. Unfortunately, grave robbers cleaned them out during the Japanese colonial period.

Across the street from the museum is a fortress, which is considered the pride of Gongju.

The Gongju mountain fortress guarded against invasion for the 64 years that the town served as the capital of the kingdom.

Standing on the side of the fortress, you can easily sense the history and glory of a long lost kingdom.