From top to bottom: “Miss, Please be Patient” by Lee Hyung-pyo; “How to get Rid of the Others,” by Anders Ronnow Kiarlund; and “Waltz with Bashir” by Ari Folman, the festival’s opener. Provided by the organizer

Movie-going is strangely fitting and addictive for long summer nights. And you’re in the right country for summer movie fun.

Cinemas stay open around the clock, and drive-in theaters never go out of fashion here. Also during the summer, a lineup of film festivals is opening, offering a blend of cinema and vacation.

The summer schedule started Wednesday with the Seoul International Youth Film Festival, which focuses on coming-of-age films by budding writers and directors. This year’s event opens with “Your Friends,” a film by Hiroki Ryuichi about a girl with a crippled leg who suffered a traumatic adolescence.

Other highlights include “The Class,” a true story about a shoot-out at an Estonian high school, and some offerings from Germany.

The biggest of all the summer film festivals is the Puchon International Fantastic Film Festival, which starts today.

PiFan focuses on horror, science fiction and fantasy genre films, and it has recovered from a period of stagnation after the city government fired the festival’s commissioner and organizers over the content of some of the films. The city wanted Puchon to have a more popular appeal for families; the organizers were more inclined towards cult movies. 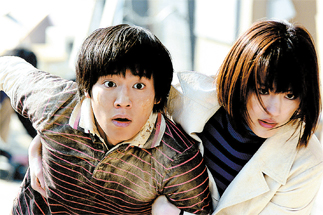 “Cyborg She” by Kwak Jae-yong closes the festival.

The juggling came to a smooth end when Han Sang-jun, the festival’s current director, joined the team two years ago. He’s come up with a program that could satisfy both camps.

This year’s festival starts with Ari Folman’s “Waltz with Bashir,” an animated documentary that was selected for Cannes’ official competition. The backdrop for this autobiographic documentary is the Lebanon War in 1982 and the experiences of Israeli soldiers. 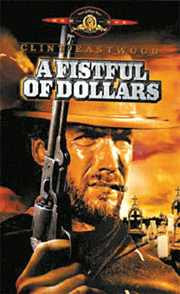 Sergio Leone’s “A Fistful of Dollars” is part of a retrospective on the director.

The festival’s program also features a special retrospective of Gregg Araki, a leading figure within the American New Queer Cinema; contemporary Russian films; Asian action and Korean spy films from the 1960s to the 1980s.

Other festivals are more socially-engaging. Corean Network Film Festival in Seoul at Indie Space is a non-competition festival on transnational issues such as race and class.

Most of the movies are by Korean directors who live overseas. “Utoro” by Takeda Tomogazu looks at the territorial rights of Korean-Japanese residents through the eyes of a Japanese director; the four-hour “The Story of Koreans in Postwar Japan” chronicles the lives of Korean migrants to Japan; “Epic of Korean-Americans” by Roberta Chang explores the untold story of the Korean diaspora to Hawaii.

“Cine-Vacances Seoul” at Cinecube adds a classic theme. A retrospective of Sergio Leone will screen six spaghetti westerns including “A Fistful of Dollars” and “Once Upon a Time in America.” 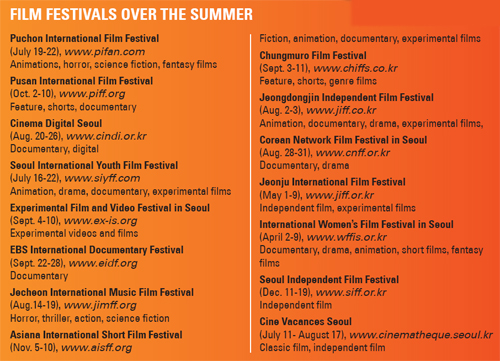 Summer’s a great time to watch films outdoors. The Youth Film Festival holds screenings under Gwansugyo Bridge over the Cheonggye Stream, Seoul, through Sept. 30, projecting films onto the concrete buttresses of the bridge.

To enjoy the sea breeze, check out Jeongdongjin Independent Film and Video Festival near Gangneung, Gangwon, on the east coast. All screenings take place in the evenings in a school playground.


And at PiFan, too, you can watch the outdoor screenings that take place at a square outside Puchon City Hall.