Modern men cook up sex appeal in the kitchen

Modern men cook up sex appeal in the kitchen 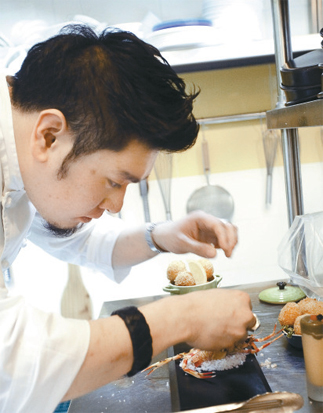 When she’s not at her day job at an architecture firm, Cho Yoo-gyeong, 28, is also a well-known gourmand.

She spends her spare time seeking out culinary delights in different corners of the world. Cho once took a food-driven trip to Tokyo just to try out some of the offerings of the Japanese capital’s famed restaurants.

Still single, she is holding out for a man who really knows his way around the kitchen.

But, she said, men her age whom she’d met on blind dates don’t understand her tastes in the opposite sex.

Her parents are the same. When her older brother tries to prepare dinner for his beloved wife, her parents complain that a man shouldn’t be wearing an apron and buzzing around the kitchen.

At times like that, Cho confessed, she wants to tell her parents that a man who cooks for the woman he loves happens to be very appealing.

When did she start to feel attracted to men who cook? 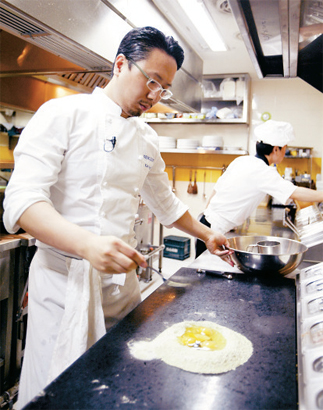 “I wasn’t like this when I was a student, when it was naturally accepted that men weren’t supposed to hang around the kitchen,” Cho said. “After I started to work in the real world, my perception changed.”

Like Cho, many women today are attracted to men who aren’t afraid to get their hands dirty in the kitchen. This doesn’t mean, however, that a cook would automatically make an ideal future husband.

But still, many women say they have a positive impression of men who know how to handle pots and pans. “A Man Who Cooks is Beautiful,” was a portal site post that recently won nods from many women bloggers.

The post said there are three things that cooking and reliable men have in common: credibility, consideration and sincerity.

From a wider perspective, this newfound appreciation for men who can cross traditional social barriers is related to the changing roles of men and women as Korea becomes a modern society.

The recent rise of attractive men flambeeing up exotic dishes in fancy kitchens on television has also no doubt contributed to the trend.

For example, on the popular cooking-based cartoon “Sikgaek,” the main character, Seong-chan, has become synonymous with an attentive man. The cartoon has been made into a popular film and television show. 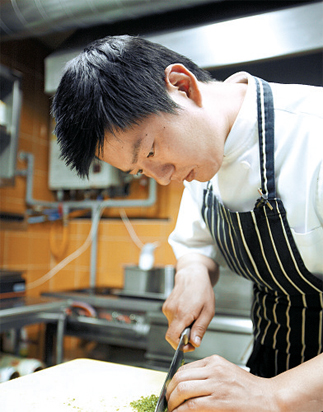 Kang previously worked for Gordon Ramsey, the Scottish chef of “Hell’s Kitchen” fame, as head chef of one of Ramsey’s restaurants in Dubai.

In the show, the three travel to different part of the Korean Peninsula seeking out the finest ingredients and creating delicacies previously unknown to the world. With their flashy cooking styles and carefully coiffed hair, the hunky chefs have legions of female fans that are growing in number.

A similar trend has already happened in Japan.

“In the mid 1990s, the Japanese pop group SMAP helped increase the popularity of men who cook, as they showed off their cooking skills on a television show,” said Kim Ji-ryong, a Japanese culture critic.

As Korea’s culinary culture shifts, men who are not necessarily interested in becoming celebrity chefs are signing up for cooking classes.

Kim Mi-jin, an MBC Culture Center manager at Lotte Department Store, said classes that teach men how to create meals for their dates, just like ones offered at upscale hotel restaurants, are increasingly popular among working men.

20 grams of cornus fruit, two cups of water, six peppermint leaves, half of a lime, 1/2 spoon of brown sugar, 1 ounce of rum and little bit of carbonated water

1. Put the cornus fruit in water and boil it for an hour. Cool.

2. Mash the mint, brown sugar, lime and rum with a wooden pestle.

3. Put the mix into a glass of cool water. Add ice and a bit of carbonated water as a finishing touch.

100 grams of green tea parfait, 100 grams of bacon, two tomatoes, 60 grams of fatsia shoots, one anchovy and a bit of white wine

1. Sprinkle olive oil over the tomatoes and put them in a 130 degree oven for about 40 minutes. Slice the bacon and lightly boil the fatsia shoots in salt water.

2. Lightly cook the garlic, bacon, anchovy and fatsia and sprinkle with white wine.

3. Gently cook the boiled green tea parfait in the same dish as the tomatoes. Arrange on a plate and serve.

2. Mix the orange juice and sugar syrup and melt the gelatin sheets into the mix.

3. Mix in the fruit and leave in the refrigerator for five hours.