The flight to the white tower

The flight to the white tower 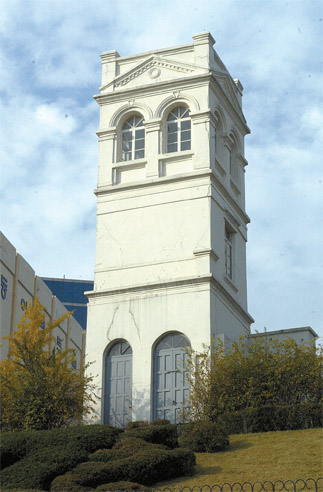 Only parts of the former Russian Legation are left. [JoongAng Ilbo]

The tower stands like an altar on a small rise in Jeong-dong, central Seoul, overlooking a park.

From a distance, it looks like part of a church, an insignificant white edifice set among other downtown buildings.

It’s hard to appreciate that this was once part of a much grander structure, the former Russian Legation to Korea, which burned down during the Korean War (1950-1953). Only this tower, renovated in the 1970s, is left.

Yet this three-story building carries the weight of Korea’s modern history.

Located at the end of a side street between the Canadian Embassy and Yewon School, the tower is a stark reminder of Korea’s attempts to navigate a safe passage through the choppy waters of geopolitics in the final years of the 19th century.

Back in the 1890s, Korea was squeezed on all sides by powerful neighbors whose greedy territorial appetites included a slice of the peninsula.

King Gojong (1952-1919), ruling over the dying days of the Joseon Dynasty, was unsure which of the imperial powers Korea should side with.

Threatened by growing Japanese ambitions, Gojong fled to the Russian Legation in 1896.

In Korean, this act became known as agwanpacheon, from agwan, referring to the Russia Legation and the word pacheon which means the flight of the king.

The catalyst for the king’s dramatic middle-of-the-night escape into the legation was the assassination of his wife, Queen Min in 1895.

Her murder is thought to have been engineered by increasingly dominant Japan.

Japan enlarged its influence over the Korean Peninsula substantially after its victory in the first Sino-Japan War (1894-1895). 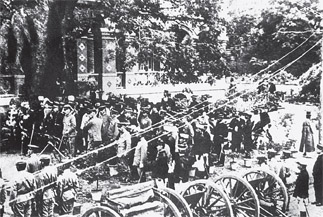 Japan’s military stage a show of force in front of the Russian Legation where King Gojong took refuge from 1896 to 1897. [JoongAng Ilbo]

Min had tried to balance the Russians against Japan in a bid to protect Korea’s national interests. Fearing it might be forced out of the country, Japan allegedly ordered Min’s death.

Gojong was also leaning toward the Russians. He fired all the officials in his cabinet who were considered to be pro- Japanese.

Russia’s influence over Korea was also strong during the last decade of the 19th century.

Karl Ivanovich Weber, who served from 1885 to 1897 as Russia’s first consul general to Korea, was known to have befriended the king.

The King’s escape to the Russian legation paved the way for a pro-Russian cabinet, and Russia received trade concessions and rights to develop mineral resources and logging.

Other foreign powers such as the United States, Germany and Great Britain were also offered concessions, giving them a great deal of say in the economic development of the country.

Gojong left the legation in 1897 and in the same year, the Korean Empire was declared.

The king, or emperor as he now was, faced mounting public pressure. 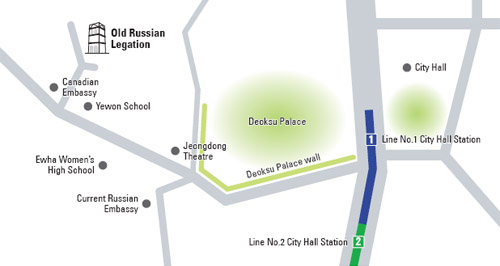 He was regarded by many as a mere puppet of foreign powers, a king who had voluntarily taken refuge in a foreign embassy.

His escape to the legation had been a desperate attempt to protect the country’s sovereignty, but Korea’s independence was doomed.

The Yamagata-Lobanov Agreement reached in June 1896 made Korea a protectorate of both Japan and Russia; both sides viewed the peninsula as a buffer between Japan and Russian interests in Manchuria.

Before that agreement, the Komura-Weber Memorandum concerning Korea signed in May 1896 emphasized how King Gojong had failed to take into account the possibility that Russia and Japan could not be played off against each other.

He had not predicted that these two nations would actually cooperate to further their interests in the peninsula.

One passage of the memorandum read: “While leaving the matter of His Majesty’s [the Korean King’s] return to the palace entirely to his own discretion and judgment the Representatives of Russia and Japan will friendly advise His Majesty to return to that palace, when no doubts concerning his safety there can be entertained.”

Through the memorandum, Russia gained the right to station troops here and gave Japan the right to veto Gojong’s cabinet.

Gojong’s actions have divided historians. Was he forced to accept these humiliating measures because he had no other options? Or was he weak and easily manipulated by foreign powers?

However history judges Gojong, the agreements with Japan and Russia led to the eventual breakup of Korea.

“During the mid-1890s, some administrative measures were adopted to improve government efficiency but without doubt the [agreement] created a hole that was exploited by various foreign countries,” said Kim Han-jong, a historian at the Korea National University of Education.

In addition to the former Russian Legation, central Seoul’s Jeong-dong boasts a number of other interesting places to visit. The entire area is full of history, particularly from that period.

Nearby is another building that featured in the history of Korea’s independence movement.

This was where the Japan-Korea Protectorate Treaty, or Eulsa Treaty, was signed in 1905.

By putting the official government stamp to the agreement, Korea gave up the right to determine its foreign policy.

Japan was now in control and five years later, it annexed Korea and occupied the country as a colony until 1945.