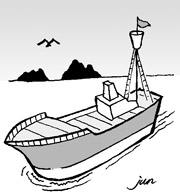 In the mid-19th century, whaling boats roamed the Pacific Ocean. Nowadays international treaties have banned whaling but nearly one hundred years ago, whales were the most sought-after trade item. Sperm whales in particular became the target of whalers, valued for the harvest of ingredients for high quality perfume and oil.

Ogasawara Island, 1,000 kilometers (621 miles) south of Japan’s main island, was a base for whaling boats, and because of its ideal location, the United States and Great Britain had their eyes on it.

Britain made the first move by building a stone monument proclaiming the island as its territory.

Later, U.S. Naval Commodore Matthew Perry landed there while sailing to Japan. He forced Japan to surrender and open its port through gunboat diplomacy. He assigned a governor general for Ogasawara to build a coal yard to provide coal to American whaling boats and declared sovereignty.

Japan was granted the territory in 1876, a lucky benefactor of a dispute over the island between the United States and Great Britain. Both did not want to lose it to the other, so they agreed to give the rights to the Japanese.

Back in those days, Western whaleboats appeared in the East Sea frequently. Since it was not hard to buy whale meat at the Busan fish market until recently, we can guess that many whales lived in the East Sea.

According to later Joseon Dynasty historical records such as the “Seungjeungwon Ilgi,” reports had been filed to the Royal Court that unidentified boats were appearing around Ulleung Island and the Dokdo islets.

One of the unidentified boats that sailed into the East Sea in 1849 was the French whaling boat named Liancourt, whose sailors first reported on Dokdo. For this reason, Dokdo has been called the Liancourt Rocks. This name has been widely used in foreign maps and documents until this day.

Naming the islets “Liancourt” rather than “Dokdo” or “Takeshima” might seem reasonable for third parties wishing to remain neutral and not take sides regarding its ownership. However, it is not so welcome for Korea.

It was fortunate that the U.S. Library of Congress’ plan to change the subject heading on Dokdo to Liancourt was dropped through the efforts of librarian Kim Ha-na.

However, we cannot sit back and applaud her work while thinking of what little effort the government has made thus far.

We cannot leave the name vague forever. We need to ensure that Dokdo reclaims its rightful name. Dokdo is Dokdo.