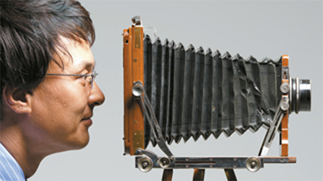 Actor and photographer Cho Min-ki is the type of man who loves to share his interests with others. He prefers to travel alone to unfamiliar places and he often falls in love with the people he meets and scenery he sees.
The photos he brings home help him to share his travel adventures with others.
Cho’s first camera was an old-fashioned classic, a non-digital shooter. It pales in comparison to some state-of-the-art equipment that many professional photographers use today, but this doesn’t lessen his passion for his art.
Over the past 14 years, Cho has created a significant portfolio of pictures that add insight into the different stages of his life.
The public know Cho best through TV shows and soap operas. He began taking photographs in 1994 as a budding actor and has two solo exhibitions under his belt so far. 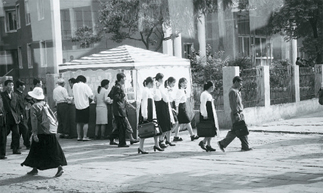 “I love taking shots of nature and kids acting natural,” said Cho.
His Web site (www.minkizio.com) hosts 1,870 photographs from such diverse locations as the Kamchatka Peninsula in the Russian Far East, Ethiopia and Pyongyang.
Cho has also posted photos taken on location while he was filming the SBS drama “Iljimae” and the film “The Cut” (2007), among others.
He plans to post photographs taken during a recent trip to Hong Kong and Macau very soon.
Cho held his first exhibition at Insa-dong’s Gallery Ssamzi in central Seoul three years ago.
It was called “Cho’s Photograph Travel Log” comprising travel photographs and diary excerpts from his first travel book, “Happy to Have Found You.”
Cho combined photographs from the book and previously unreleased snapshots from his travels in his latest exhibition.
“I was afraid my photographs would be downgraded to mere pictures in a book and therefore took a chance at holding my own exhibition,” said Cho.
His second exhibition, “Love and Ambition,” in 2006 was a collection of photographs taken on the set of a soap opera with the same title.
“The focus was on the similarities between the characters in the drama and the personalities of actors playing the different roles in the story,” Cho said.
Cho was included in an exhibition with two colleagues who share the same passion for photography.

In April 2007, Cho showcased his work at the Seo Gallery in Seocho-dong, southern Seoul, along with comedian Chung Jong-chul and singer Park Ji-yoon.
The exhibition, “Three People, Three Colors,” was divided into three sections: heart-warming scenes, children and nature.
The money raised at the exhibition was donated to help underprivileged children.
He maintains close relations with Chung and the actress Kim Min-sun. They frequently discuss new camera equipment and share ideas.
Like a true veteran cameraman, Cho spoke of his preference for DSLR cameras, such as 1Ds Mark III and 1Ds Mark II.
He said he was particularly fond of classic cameras because they allow greater control over exposure, distance and angles.
Cho opened his own studio, “st. zio” in Apgujeong-dong, southern Seoul, in June.
“In the past, I took photographs of messages provided by nature, and now I hope to relay my stories through photographs.
“This studio is the first step I’ve taken toward reaching that goal,” he added.

The studio also provides Cho with a comfortable working space and a place to store the basic equipment needed to take decent photographs.
Cho’s three-floor studio is equipped for weddings, advertising and catalogues.
“I put a lot of effort into getting the right equipment and creating a useful working space that will allow me to take the photos that I want to share with the world,” the actor said.
Cho continues to try his best to work as one with nature through his lens.
He takes his camera with him everywhere, and says he has learned about the world through the camera lens as much as he has through acting.
His success as an actor perhaps derives from the inner motivation that’s evident in his love of photography.