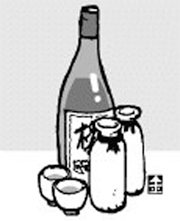 In ancient days, alcohol was brewed through a combination of yeast fermentation and well-chewed boiled grains.

Human saliva is capable of changing starch into maltose, and during fermentation the yeast breaks sugar down into alcohol. The distillation of alcohol was viewed as a divine process, and only female shamans were authorized to chew the grains.

The emergence of malt made the process of brewing alcohol more convenient. It first appeared at a time when China was ruled by a feudal system during the Spring and Autumn Period. The Chinese succeeded in making malt after breeding special molds on plants. The way to brew alcohol using malt was transferred into Korea and then spread through Japan.

Sake rice wine is a traditional Japanese alcoholic beverage. Sake began being re-imported to the Korean Peninsula during Japanese colonization. A Japanese brewer in Busan hit the jackpot by launching refined rice wine called masamune, jeongjong in Korean. Since then, jeongjong has become synonymous with sake in Korea.

Rice for sake is cultivated separately in Japan. It requires far bigger grains, and is twice as expensive as ordinary rice. Sake is graded depending on the rate of rice polishing and alcoholic content. If sake with a polish rate of fifty percent is fermented slowly at low temperatures, it gets the highest rating. The polish rate for rice we eat is ninety percent. The price of sake can vary greatly depending on the grade.

Young Korean wine lovers seem to be attracted to sake these days. During the first half of the year, the amount of sake imported from Japan exceeded $2.5 million, at 752 tons. Sake bars sprouted around Gangnam in southern Seoul, and the popularity of the drink spread beyond the capital.

However, there is no need for us to get too excited. Twenty years have already passed since Japanese white-collar workers were first attracted to Korean soju. The amount of Korean soju exported to Japan is close to $100 million per year, nearly forty times the amount of sake imported.

It looks as if young people from both countries have found some common ground with each other over a few drinks.

However, the Japanese government raised the Dokdo issue rather suddenly, striking us while we weren’t looking. Most soju has an alcohol content of 25 percent, while sake has just 15 percent alcohol, which is rather weak.

I wonder if the secret information that Korean people also enjoy weak soju might have been leaked to Japan.