China desert comes to life in ‘Good, Bad and Weird’

China desert comes to life in ‘Good, Bad and Weird’


A suspense-filled wilderness creates an unpredictable scene for a cowboy gunfight, but a bloody battle begins that will only end in absolute victory or absolute defeat.
Director Kim Jee-woon was captivated by such a scene from Sergio Leone’s 1966 so-called spaghetti western, “The Good, the Bad and the Ugly.”
And last week, he released his own take on cowboys, “The Good, the Bad and the Weird.”
The film, which had a budget of 1.8 billion won ($1.8 million), attracted more than 2 million viewers in the four days after its release, according to the Korean Film Council. The CGV Yongsan in central Seoul is now offering English subtitles until Aug. 31.
“The cheeky characters in cowboy pictures are very charming,” Kim said. “They’re antihero and antisocial.” 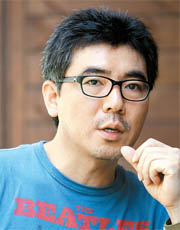 While researching the film, Kim came across a Korean-made Manchurian western, “Break the Chain” (1971), directed by Lee Man-hui.
“Lee’s film was all about lawless male characters,” Kim said.
Break the Chain reflects the mood of people living helplessly under a repressed government.
The film is set in Manchuria during the Japanese rule of Korea. Patriotic fighters gathered there to resist the Japanese army and bandits.
The Good, the Bad and the Weird, Korea’s first western in several decades, is also set in 1930s Manchuria during the Japanese colonial period.
There are three outlaws ? good guy Do-won (Jung Woo-sung), bad guy Chang-e (Lee Byung-hun) and weird guy Tae-gu (Song Gang-ho). All three spend the movie on horseback chasing after a treasure map hidden in the wild desert.
At first, The Good, the Bad and the Weird was a working title that Kim used to refer to Leone’s 1960s western. Other title options were “The Tale of Three Wicked Men” or “Three Wicked Men in the Wilderness.”
“But they were lame,” Kim said.
Actor Song from “The Host” (2006) was the first actor Kim cast for the film. The two had previously worked on “The Foul King” (2000) and promised to produce another film together in the future. 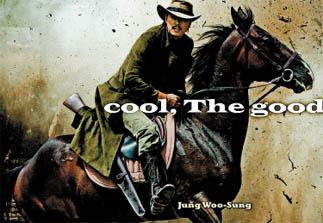 “Song had finished filming ‘The Host’ and I had just finished ‘A Bittersweet Life.’ We were both available for another film,” Kim said. They reunited seven years after filming The Host.
When Kim proposed the idea of a western to Song, the actor was more than surprised. He was cynical.
“A cowboy film in Korea?” Song doubtfully asked, though after second thought, he smiled and agreed, according to Kim.
Casting the good guy called for more prudence.
“He had to be handsome,” the director said. To Kim, Jung looked the best on horseback with a rifle strapped across his shoulders.
The bad guy and actor Lee had one thing in common, Kim said. “Neither can stand being second. They have to be the best.”
To Kim, the three formed a dream cast, but that didn’t make filming in China’s Gobi Desert any easier.
The temperature exceeded 40 degrees Celsius (104 Fahrenheit) every day. Kim recalls the dreadful environment.

“When I wore my sneakers on the first day of filming, my feet were burning. Later, I bought a pair of hiking boots that have thick soles.”
The air was full of sand dust, and the ground was messy with untrained horses, secondhand auto bikes and cars and some 40 Korean and 80 Chinese staff members.
“The staff was always one step ahead of losing their minds,” Kim said.
“Even though, we successfully brought thrilling action and chases to the screen. Korean films have been craving that for a long time.”
The film did homage to a spaghetti western but “the Korean style offers a whole different world once you see it.”
Any message from the director?
“Life is all about chasing and being chased.”