Marriage on the rocks

Marriage on the rocks 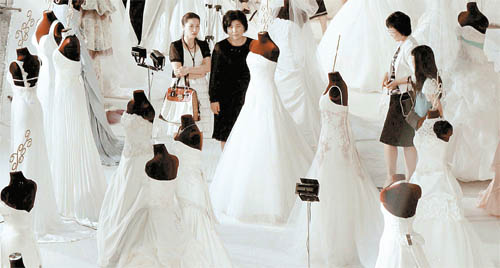 Wedding dresses at an exhibition in Busan on July 1 hosted by an association of wedding-related companies called the Korea Wedding Union.[JoongAng Ilbo]

ASAN In response to the dropping fertility rate in Korea, an unlikely bunch of matchmakers is rolling up sleeves to play Cupid.
Officials of regional governments are running “speed meetings” for single men and women who want to get married.
While speed dating is not new in Korea, mass blind dates set up by local government officials are.
“The Bible says, ‘Ask and it will be given to you. Seek and you will find. Knock and the door will be opened to you,’” said Kang Hee-bok, the mayor of the city of Asan, two hours south of Seoul in South Chungcheong.
Twenty nervous-looking unmarried men and 20 equally anxious unmarried women listened attentively in the banquet hall of a local hotel last Saturday afternoon.
“Marriage is a rough journey, but only when you’re in it can you taste all that’s sweet and bitter in life,” continued the mayor.
Commercial dating companies charge around 150,000 won ($147.60) per person for speed dating.
The event hosted by the Asan government was free.
The “date” began with each of the 20 couples, all from Asan, sitting at separate tables.
“What do you do on your day off?” one man asked his partner.
“Umm ... I usually go to the movies,” a woman seated next to him replied with a shy smile.
Marriage guidance counselors from the Asan government have already analyzed everyone’s age, interests, hometowns, education background and so on.
Noh Gyeong-seon of Sunoo, a marriage consulting firm that helped organize the Asan event, claims that the first person you meet at a speed date is often the most memorable. 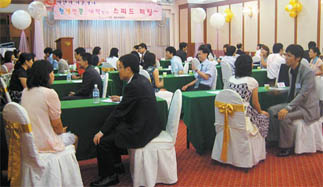 Single men and women in Asan meet for a speed date set up by the city government last Saturday.By Kim Hyung-eun

But even if the couples meet their perfect match, they have to move on to another person after
five minutes. The aim is for every male to meet every female for five minutes of small talk
Officials say this mass date is a golden opportunity for these young people.
“An average single Korean goes on seven to eight blind dates a year,” said Lee Ung-jin, the president of Sunoo. “Speed dating is tiring, but it’s also a rare opportunity to look beyond obvious charms such as looks and eloquence and give everyone a chance.”
At the end of the four-hour event, the organizers claimed that eight couples had decided to go on another date with each other.
Whether that date will lead to wedding bells and even to the patter of tiny feet, as the Asan government hopes, is another issue.
The problem in Korea is that an increasing number of Koreans are souring on the idea of marriage and raising a family. Many young people say the cost of childcare and education makes bringing up a child a daunting prospect.
The National Statistical Office’s data shows that the marriage rate the number of marriages divided by 1,000 people decreased to 7 percent last year from 9.6 percent in 1991.
Meanwhile, people are getting married later: The average age for marriage went up to 29.6 last year from 27 in 1996.
More worrying, Korea’s fertility rate stood at 1.26 last year. The average fertility rate in countries belonging to the Organisation for Economic Cooperation and Development is 1.6.
Korea’s statistical bureau predicts that the nation will become a super-aged society in 2030. Senior citizens aged over 65 will account for 24.2 percent of the total population. Last year, the figure was 9.1 percent. 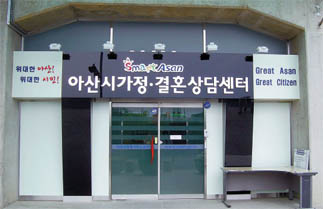 Single men and women in Asan meet for a speed date set up by the city government last Saturday.By Kim Hyung-eun

The demographic challenge is more evident in rural areas. Recent data from the National Statistical Office shows that 40 percent of men in farming and fishing communities married women from overseas last year. In Asan, 36 percent of men aged between 25 and 39 were still single in 2007.
Acknowledging the potential demographic catastrophe, Asan became the first local administrative government in Korea to set up a marriage consultation center, a permanent division for matchmaking, wedding planning and other family affairs.
Since its launch in May, about 300 people have registered for services that include matchmaking events like Saturday’s event and consultations.
Although it’s too early to evaluate the effectiveness of such services, most participants at the recent dating event seemed satisfied.
“After a certain age, it’s not easy to get dates. In that sense, it was worth participating. Also, the identities of people here have been previously checked by the Asan government, so I feel safe and secure,” said Kim Mi-yeon, a 30-year-old city official.
The officials at Asan take pride in the credibility and affordability of their dating service.
“This isn’t a business about making money,” said Mayor Kang. “We’re just like parents who want our children to have happy families.” 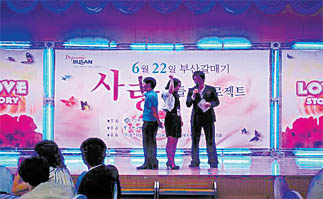 The group date organized by the Busan government last month brought together 100 singles.Provided by Planned Population Federation of Korea

However, other daters thought the meeting was overcrowded. “I think around 15 people would be better,” said Shin, a 30-year-old participant who declined to give a full name. “After about eight dates, you lose track.”
Asan’s marriage consultation center plans to hold regular events, and even expand them if they go down well.
“We welcome participation from single men and women from other areas, too,” said Kim Se-ki, the center’s director. “It’s difficult to set people up within Asan, only. It’s crucial we seek partnerships with other local governments and work together.”
Such collaboration may be on its way as a growing number of regional administrations in Korea are taking up the role of matchmaking.
Last month, the Busan government asked the marriage support center of the Planned Population Federation of Korea ? the same group that helped organize the Asan event ? to co-organize a group date for a 100 people in the port city.
So far no couple who met at the 100-strong super date has made wedding plans.

If they do, Busan Mayor Hur Nam-sik has pledged to officiate the ceremony and present the bride and groom with a honeymoon cruise package.
Also, officials at Uiseong County Office in North Gyeongsang hosted a group date last month for 60 single men and women.
At this point, it’s not clear whether or not the central government will get involved and assist local government initiatives to boost the marriage rate in Korea.
The national government funded the federation until 1999, but now it relies on funds from the local authorities.
The Ministry for Health, Welfare and Family Affairs (then the Ministry of Health and Welfare) was criticized in 2005 for setting up a dating service for its employees who were single.
Civic groups such as the Lesbian Counseling Center say matchmaking is not the solution to problems with marriage and the low birthrate.
“Marriage is an option not a must,” said Hyeon Park Jeong-won, head of the center.
Officials in the federation are quick to admit that organized mass blind dates might not be a perfect response to the problems at hand, but they believe they are heading in the right direction.

“A happy family is the basic component of a healthy community and prosperous country. Marriage is not a personal issue,” said Kim Hyung-gon, head of the marriage support center in the federation.
“Some people think the social system in Korea is not so favorable for getting married and raising kids. But we want to spread marriage-friendly values to help set up the establishment of such infrastructure.”