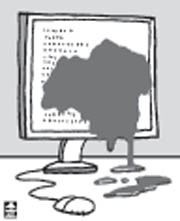 Gossip can be more influential than reality. The Max Planck Institute for Evolutionary Biology set out to prove this recently.

The research team played an investment game with 126 students. They grouped them into 14 teams of nine and gave them each 10 euros.

According to the game, if student A gave 1.25 euros to student B, then the research team gave 0.75 euro more to student B. Who gave money to whom was not disclosed. The crux of the game was to have each trust one another; the more they invested, the more everyone benefitted.

As the game progressed, investment information was given to participants. Not only was the actual record of a student investing in another student provided, but also gossip was shared as to whether the investor was “a giving person” or “a mean miser.”

The research team’s explanation was: “People cannot always know another person’s behavior. Therefore, they lean more toward the gossip gathered by other people.”

Anthropologists explain that sharing of knowledge through gossip enhances a group’s coherence, and plays a positive role in forcing people, afraid of their own reputation, to cooperate.

However, in our modern mass media society, gossip helps to spread unfounded rumors about celebrities for the purpose of entertainment. Gossip full of slander that spreads through the Internet on message boards has a malicious ripple effect.

Last Thursday, when it became known that the “Korean Wave” star Kwon Sang-u and entertainer Son Tae-young were dating and planning to get married, the Internet quickly became flooded with malicious gossip regarding their wedding with Son, especially, a target of defamatory attacks. Their names ranked at the top of Internet keyword searches as everyone jumped the gossip bandwagon.

Kwon wrote on Monday on his fan Web site: “How so many people came to say and write things that are unspeakable overnight makes me cry.”

If you point the finger at others, you should know that three of your own fingers are pointing right back at you.