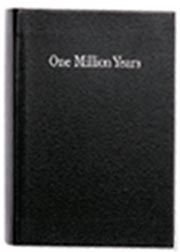 On Kawara’s “I Went” (left) and “One Million Years.” Provided by the organizer

Japanese artist On Kawara considers every minute of every day a form of art, recording daily events into conceptual forms ? in this case, a book.
The doArt Gallery in Sagandong, central Seoul, is displaying five collections of his works, all of which are sensitive to time and existence: “I Met,” “I Went,” “I Got Up,” “One Million Years” and “Pure Consciousness.” The exhibition runs through Aug. 24.
I Met is a series of 12 books (one book per year) that contain the names of people Kawara met between June 1968 and September 1979 during his travels around the world.
I Went has more details. Under the same time frame ? 12 years ? Kawara, 76, records the places he visited on a geographic map.
The 12 books of I Got Up comprise a collection of postcards that Kawara sent to two people every day for more than a decade.
The number 12 isn’t significant, though, according to Kim Jyeong-yeon, head of the doArt exhibition team. 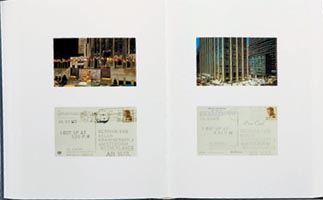 On Kawara’s “I Went” (left) and “One Million Years.” Provided by the organizer

“His work could have continued until today if he hadn’t lost [his tools] in Switzerland in 1979,” she said.
After losing tools of his trade, Kawara stopped work on these projects, and it just happened to be 12 years after he started, according to Kim’s research.
The artist is intensely private. “Kawara is an artist completely covered in a veil,” Kim said.
“His works reveal numbers, words and images not of him but around him. No personal traces can be found,” she said.
All Kawara has revealed publicly so far is his age ? 27,606 days old as of today.

Kawara’s most representative collection is “Date Painting,” but it is not displayed at the Seoul gallery.
The Date Painting collection started in 1966 in New York. Kawara paints dates on canvas every day and describes the events that were taking place.
Kawara’s sensitivity to conceptual time started when he saw wall paintings at the Altamira Caves in Spain.
It was a life-changing moment for the artist, Kim said.
“Though tens of thousands of years have passed since the mural was first painted, Kawara was charmed that the painting still had the power to move people,” Kim said.
“He says there is nothing more powerful than the arts.”