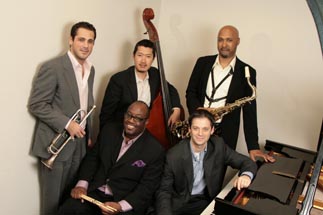 Friday to Saturday: “Juilliard Jazz All Stars Concert.” Some of the best jazz players in the world will be visiting Seoul this weekend. The famous group, composed of “jazz geniuses,” mostly former professors from the prestigious Juilliard School of New York, will perform for the first time in Korea.
The Juilliard Jazz All Stars, who are already popular in the United States and Europe, are embarking on their first Asia tour. The group will perform music from the standard jazz repertoire, as well as new arrangements and original compositions by members. Some Korean jazz musicians will also participate in the concerts.
The All Stars musicians on display include Ron Balke on saxophone, Carl Allen on drums, Adam Birnbaum and Mayuko Kalakura on piano, Dominick Frarinacc on trumpet and Yasushi Nakamura on contrabass.
They will also be holding a jazz workshop at the Art and Design House of Myongji University in central Seoul. This will be a great opportunity for musicians to improve their skills under the expert tutelage of the Juilliard All Stars.
Tickets range from 60.000 won to 120,000 won.
The concert begins at 8 p.m. on Friday and 7 p.m. on Saturday.
Sinchon Station, line No. 2, exit 2 or 3
(031) 813-7838, www.interpark.co.kr

SUNGKOK ART MUSEUM
To Sept. 29: “Chuck Close Prints: Process and Collaboration.” Chuck Close, born in 1940 in Monroe, Washington in the United States, chose art as a way of adapting to the world since childhood, when he suffered from dyslexia. He decided to become a painter when he was 14 after seeing the abstract paintings of Jackson Pollock, when abstract expressionism was in vogue in the United States.
Close drew attention in the late 1960s as a hyperrealist portrait painter and photographer, and has created large prints for more than 30 years. His print works focus on photographs of men and women and are produced by making 100 plates for 100 colors. Sometimes it takes him more than two years to produce a single print. He has explored a variety of printing genres, using techniques such as mezzotint, etching, silk screen, lithography, pulp paper multiples, Japanese style woodcut, European-style woodcut and linoleum printing.
In an age of mechanical reproduction, printing can be seen as a forerunner of modern art, encompassing photography and video. Although printing has a quality that other reproductive art forms do not, the artisan’s aura is still in the work.
The museum is open from 10 a.m. to 6 p.m. Closed on Mondays. Admission is 5,000 won ($5) for adults and 3,000 won for teenagers.
Gwanghwamun Station, line No. 5, exit 7, or Gyeongbokgung Station, line No. 3, exit 7
(02) 737-7650, www.sungkokmuseum.com

NATIONAL MUSEUM OF KOREA
Friday to Aug. 16: “Aladdin’s Magic Lamp.” A family musical for the summer break will begin in Seoul this weekend. Aladdin’s Magic Lamp is a colorful and adventurous event.
The musical is the masterpiece of the Flight Musical Company of Japan, whose “mask plays” have received worldwide acclaim for their characters who don cleverly crafted masks that stimulate children’s imaginations.
Famous Korean dubbing artists Bae Han-seong and Seong Do-sun from major Korean broadcasting companies will be participating to add local flavor to the musical.
Tickets range from 20,000 won to 50,000 won.
The show is staged in Yong Theater at the National Museum of Korea in Yongsan District, central Seoul.
Performances are held at 11 a.m., 2 and 5 p.m. from Tuesdays to Sundays.
Ichon Station, line No. 4, exit 2
(02) 2077-9000, www.theateryong.or.kr


LE MEILLEUR THEATER
From Friday: “Oh! While You Were Sleeping.” Nominated as Best Musical at the 2006 Korean Musical Awards, While You Were Sleeping enjoyed considerable success in its first run in 2005.
The musical has been described as an encouraging story about people trying to deal with the pain of a broken heart. The musical aims to make people pause in their busy lives and realize the value of friends and family, as well as themselves.
For its comeback, the musical will be shown in the smaller Le Meilleur theater in Daehangno, central Seoul, where audiences will catch an even more intimate performance.
Tickets range from 30,000 won to 90,000 won.
The show is staged at 8 p.m. from Tuesday through Friday, 4 and 7 p.m. on Saturdays and 4 p.m. on Sundays and holidays.
Hyewha Station, line No. 4, exit 2
(02) 744-7090, www.interpark.co.kr


NAON THEATER
Saturday to Aug. 31: “The Seagull.” The performance beginning this weekend entitled “The Seagull” is neither a musical nor a play, but what has been described as a “live musical play.”

The original four-act play was written by Russian playwright Anton Chekhov in the 19th century. The background, set, characters and dialogue, however, have been modernized in order for audiences of today to appreciate the work.

The story centers on the idea of one-sided love: all the characters in the play are in love with someone who doesn’t feel the same way. The Seagull is also unique in that there are no entrances or exits for the characters: the entire cast stays on stage until the end of the play.
The play gets its “live musical” tag from the fact that all the music is performed acoustically on piano, violin and contrabass, without any electronic or prerecorded music. The live acoustic score plays an important role in the play to express the inner feelings of the characters without words.
Tickets range from 15,000 won to 20,000 won.
The show is staged at 8 p.m. on weekdays (except for Mondays), 3 and 7 p.m. on weekdays and holidays.
Hyewha Station, line No. 4, exit 4
(02) 3675-3677, www.interpark.co.kr


MELON AX HALL
Aug. 1 to 2: “Jason Mraz Live in Seoul.” Jason Mraz is a Grammy-nominated American singer/songwriter who has performed with famous artists such as The Rolling Stones, Bob Dylan, the Dave Matthews Band, James Blunt, Gavin DeGraw and Alanis Morissette.
After his concert in Korea last March, Jason Mraz is back with a new album titled, “We Sing. We Dance. We Steal Things.”
As part of the “Beautiful Singer Songwriter Series” organized by Korean promoter Private Curve, Mraz will present more powerful songs than those in his previous Korea concert, with a full band comprising bass, guitar, drums, trumpet and saxophone.
Many of his song lyrics are based on powerful yet delicate observations. Tracks from the new album, released earlier this May, such as “Live High,” “If It Kills Me” and “A Beautiful Mess,” as well as his previous hit songs, will be performed at next weekend’s concerts.
Tickets cost 77,000 won.
The concerts begin at 8:30 p.m. on Friday and 7 p.m. on Saturday.
Gwangnaru Station, line No. 5, exit 2
(02) 563-0595, www.ax-korea.com


ROLLING HALL
Saturday: “Transfixion Third Album Release Concert.” Modern Korean rock group Transfixion is holding a concert to celebrate last month’s release of its third album, titled “Revolution.”
Transfixion is currently enjoying its status as an icon to the rock bands around the lively Hongdae music venues in northern Seoul. The band has performed in many joint concerts of late, but this weekend’s “Radio Revolution” concert will be their first solo concert since their highly celebrated Christmas concert of 2006.
The band is planning to play songs from its first and second albums which have not been performed live very often. Also, songs from their latest album, including “Radio,” “For Victory,” “I Want You Baby” and “I Don’t Love You Anymore” will be performed.
Standing tickets for the show cost 30,000 won.
The concert begins at 7 p.m.
Hongik University Station, line No. 2, exit 2
(02) 325-6071, www.interpark.co.kr


THE WORLD DRUMMER FESTIVAL, Grace Hall
Aug. 2: The first World Drummer Festival will be held in Korea with Australian professional drummer Daniel Luttick and Korean drummer Park Sang-yeol performing and conducting a drum clinic for aspiring young drummers.
Luttick’s intense passion for rhythm and music began at a young age. Since then Luttick has played and studied with some of the best players in Australia and the United States, notably Dom Famularo, Jim Chapin, Joe Morello and fellow Australian drumming icon Virgil Donati. Luttick made his name after winning Australia’s Up and Coming Drummer Competition, and has been the drummer for Eric Martin, the vocalist of Mr. Big.
Park Sang-yeol, who used to be a member of progressive rock band Jeremy, has been invited as the Korean representative. Park is well-known as an aggressive and talented drummer.
Rather than being in competition, the two world-renowned drummers from different cultures will unite in the name of music. The highlight of the festival will be the finale of their performance, when Luttick and Park will play at the same time.
Other programs have been prepared for the festival, including a drum clinic, which will be hosted by Luttick.
Tickets cost 15,000 won for all seats. First come, first served.
The festival starts at 5 p.m.
Seolleung Station, line No. 2, exit 7
(031) 713-6140, www.interpark.co.kr