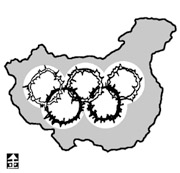 Once summer comes, thistles cover the mountains and valleys of the Korean Peninsula in a blanket of purple.

The flowers spread evenly across the entire region, from Korea to Japan and northeast China.

Scotland’s national flower is the thistle, and according to legend, it helped to keep out invaders.

When Scotland’s enemies tried to steal silently across the loosely controlled borders, their bare feet would stumble on the thistles, making the invaders scream out in pain.

This is why Scotland exalts the thistle, recognizing the debt it owes the plant.

Thistles have a millennia-old association with Beijing, where the Olympics will soon be held.

Three thousand years ago, during the Zhou Dynasty, Beijing was called by a Chinese character gye, meaning a thistle. Even nowadays, a lot of thistles bloom in the fields around Beijing and its vicinity.

That name survived until the Tang Dynasty when it was changed to Youzhou and then to Yenjing. Then in the early 1900s, during the Republican period, the capital briefly ceased to be the capital and was called Peiping, not Beijing. Jing means capital city.

The inner meaning of the word “thistle” is interesting. Perhaps because of the thorns, the word is associated with the idea of “dignity” and “authority.” There is also the meaning of “Don’t touch,” for obvious reasons, and the related notion of “not easy to approach.”

There is a great deal of expectation surrounding the Beijing Olympics: The organizers have several thorny problems to iron out.

Perhaps it is because security is such a top priority, the Chinese authorities seem to be trying to control everything.

Many Chinese have traveled from the countryside to Beijing to find out that their trip was futile.

There are restrictions on foreigners who are applying for multiple entry visas.

So it looks like the Games will become a sports event that is restricted in terms of who can actually attend.

Thinking in terms of dignity, authority and unapproachability, it is not so difficult to think of the Beijing Olympics using the image of a thistle.

And when you think about it, the relationship between the city of Beijing and the thistle is perhaps not so easy to separate, just as history tells us.