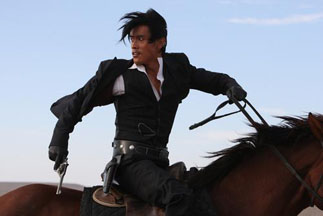 The demonic Park Chang-yi (Lee Byung-hun) serves as “the bad” in “The Good, The Bad and The Weird.”[JoongAng Ilbo]

“The Good, The Bad and The Weird,” a Korean western in theaters now, is a decidedly Asian take on the usually grim genre.

Instead of sticking to a palette of muted earth tones, director Kim Jee-woon paints his picture with sumptuous colors, with the scarlet red of women’s lips, the purple crushed velvet of a gunman’s jacket and the jewel-toned silks on the wealthier characters.

The choice seems appropriate, considering the manic neon lights that illuminate the Seoul streets, as compared to the dusty prairies of the American west.

The Asian setting of the film also allows for a whole new magazine of weaponry. In addition to six-shooters and shotguns, the men of the Manchurian desert arm themselves with bamboo spears and even a medieval mace or two.

One of the story’s main characters, “the weird” Yoon Tae-goo (Song Gang-ho), also provides a distinctly Asian form of comic relief. His antics are considerably goofier than anything audiences would see in say, “3:10 to Yuma,” but judging by the laughs in the theater, they seemed to go over well.

Tae-goo’s weirdness, however, does seem a bit out of place in a western. For example, his choice of headgear deviates from the typical western choice of the 10-gallon hat; instead, he wears either a Russian-style winter hunting cap (the pom-pom of which gets shot off in a gunfight) or a leather flight helmet. Looks like someone has a penchant for earflaps.

But “the weird” isn’t the only one with odd wardrobe choices. “The bad,” the wild-eyed Park Chang-yi (Lee Byung-hun), seems to have stepped out of a present-day Korean mobster movie with his jet-black zoot suits and Yakuza-inspired hairdo.

The only one who seems to be adequately dressed right for 1930s Manchuria is “the good,” Park Do-won (Jung Woo-sung), who could fit in with Jesse James or Robert Ford.

But haberdashery aside, The Good, the Bad and the Weird, aside from sounding like (as my colleague said) a list of my ex-boyfriends, is decently entertaining ? at least, for the first hour and a half.

The story revolves around a treasure map, one that could help Japan-colonized Korea toward independence, extend the reign of the Japanese or provide great riches to bandits with more selfish desires. Do-won pursues the map for the first reason, and both Chang-yi and Tae-goo choose the third. The Japanese army, of course, chooses the second. The result is a wild goose chase across the Manchurian desert.

But once The Good, the Bad and the Weird got into hour two, I found myself slipping my cell phone out of my purse to check the time. How many more gunfights would my eardrums have to endure? How many more ounces of blood would have to be shed in the sand? And for goodness sake, why were all the women in the film fools of either the simpering or whimpering varieties?

It drags on and on, but The Good, the Bad and the Weird clearly reflects its slick production, and the English subtitles at CGV Yongsan do allow non-Koreans to tap into the world of Korean cinema.

I just wish that world, in this film at least, had more to offer.