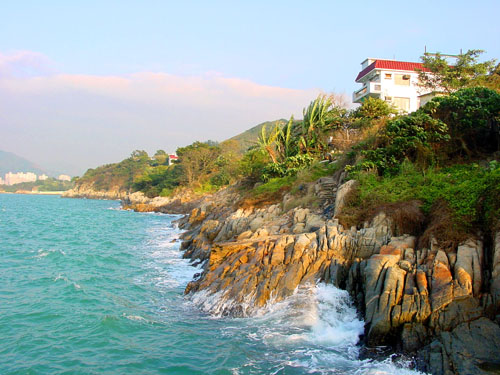 A private residence overlooks the northern Lamma shoreline. The high rises in the background are located on Hong Kong Island.


Hong Kong is the urban sprawl you read about and see in movies, but the outlying islands are well worth exploring.
On a recent trip I was heading to Lamma Island, a picturesque rural retreat about 30 minutes from Hong Kong Island by ferry.
I landed at dawn in one of Hong Kong’s worst ever storms. Taxiing along the runaway was like driving through a giant car wash.
My luggage got soaked on the airport tarmac and I was told that a Black Rain weather warning had been issued, bringing the city to a halt.
This meant the ferries were suspended, leaving swimming the only option if I wanted to get to Lamma that day. 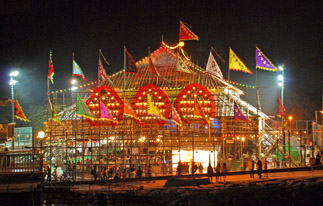 Blast, I thought. Instead of a day carousing with old friends on Lamma Island, I spent the night in a dank hotel in Causeway Bay, the most densely packed commercial district on Earth.
I ordered in bowls of steaming noodles from a nearby dai pai dong, a food stall similar to a pochangmacha in Korea, and listened to the rain drum against the tiny window.
The next morning, the deluge relented and the ferries were back in service. I caught the ferry from the pier in front of the colossal International Finance Centre.
The IFC might look familiar. It’s the one Lara Croft leaps off in the second “Tomb Raider” film and it makes an appearance in this year’s Batman, so I’ve heard. 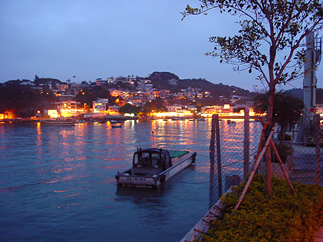 I sat on the outer deck of the Lamma-bound boat and took in the familiar sights of Victoria Harbour.
There was the IFC tower hidden behind grim clouds. There’s the Star Ferry chugging through the choppy waters between Hong Kong Island and Kowloon side. There’s where the Peak should be, but the highest point on Hong Kong Island was consumed in mist. Oh, and there’s another thunderous fat cloud heading this way.
Within minutes the harbor was engulfed. The sky became the sea and the sea the sky. I stayed outdoors on the open deck like the captain of a doomed ship. I’d never seen so much rain fall out the sky.
Soggy friends met me at the pier in Yung Shue Wan, the main village on the island, armed with umbrellas and raincoats. We dashed to Lamcombe’s, one of several seafood restaurants near the pier where you can dine outside under a canopy. 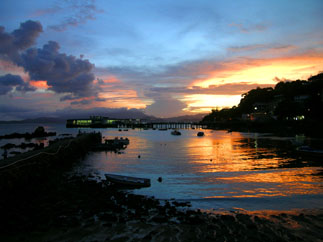 As we caught up with each other’s news, the waiters brought over a steady stream of steamed garupa, pan-roasted scallops, spicy beef noodles, broccoli flash-fried in garlic and bottles of Tsingtao beer.
Food is one very good reason to visit Lamma. I’ve eaten Chinese, Thai, Japanese, Turkish, Indian and even British cuisine in the past, often in a single weekend.
This island, the third largest in Hong Kong, is home to a mishmash of nationalities, and the variety of food reflects the island’s international character.
You can expect to run into Poles, Swedes, Zambians, Aussies, Filipinos and Spaniards, among countless others, especially if you frequent the Yung Shue Wan bars.
At the last count, 60 nationalities were represented on an island with a population of around 6,000, perhaps more.
The majority is Cantonese-speaking Chinese and there are a lot of British people ? no surprise given Hong Kong’s colonial past ? but the ethnic diversity is astonishing.
Long-term Lamma resident Lamma-Gung, an expat who runs the island’s Webzine, says there’s even been talk of a Guinness World Record attempt: the most cosmopolitan village in the world. 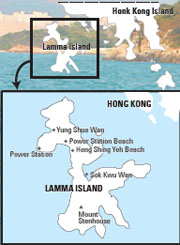 If the weather’s dry, but even if it’s not, Lamma has some pleasant walks. The most popular trail runs from Yung Shue Wan to the island’s second village, Sok Kwu Wan.
The path gets steep in places but unless you hit a tour group or get bitten all over by mosquitoes, this is a peaceful stroll.
Birds of prey wheel overhead, waves crash against the rocky shoreline below, butterflies the size of your fist flutter by and giant yellow spiders doze in the trees.
During the early part of the summer the island reverberates with croaking frogs and if you’re lucky, you’ll spot snakes. What kind? The only serpent-like creature I’ve seen here was a cobra, I think, but a friend assures me pythons make Lamma home.
The downside to the fauna on Lamma is that special breed of dog owner who lets his or her mutt foul the path and leap at your face, often at the same time. The dogs are fine, but some owners need leashing.
If you have a few hours to spend in Hong Kong, my tip is to take a ferry from Hong Kong Island straight to Sok Kwu Wan. Eat lunch in one of the seafood diners there and then amble over to Yung Shue Wan in the afternoon.
The ferries are more regular from Yung Shue Wan back to Hong Kong Island. They’re infrequent from Sok Kwu Wan.
My top tip is to walk this trail at night. Take a flashlight, don’t go alone and relish the shadows and silence. If the skies are clear, you can navigate by the light of the moon.

Can you take a taxi across the island? A bus?
No. Lamma is traffic free. No cars, no motorbikes, not trucks, no buses. You either walk or cycle.
Another recreational option on Lamma is swimming in the sea. Hung Shing Yeh beach has changing facilities, BBQ pits, lifeguards and a shark net. The water quality is fine.
It’s proximity to Yung Shue Wan means the beach gets noisy at weekends. An alternative, one popular with residents, is Power Station beach, so named because it’s adjacent to a massive coal-burning plant.
I know. How can you swim next to those hulking chimney stacks? True, the power plant is an eyesore, but, as far as I know, no one has emerged glowing from the waves sporting three eyeballs and no ears. I’ve swum there lots of times and there’s often sailing, windsurfing and an occasional weekend-long party. If anything, the power station is a reminder that life is rarely perfect.
My friends and I had planned to walk down to the beach after lunch, but having polished off half the fish in the restaurant’s tanks and guzzled a crate of beer, we decided a better option was more alcohol.
The actor Oliver Reed once said you meet a better class of person in pubs, and this is true for most of the Lamma bars
We ordered more Tsingtao overlooking the bay and caught a sunset that looked scripted.

Lamma Island Info
Everything you need to know about Lamma Island is on the Web site of Lamma-Gung, a long-term Lamma resident and the brains behind www.lamma.com.hk. All ferry times, restaurants and places for accommodation are listed here.

Other Outlying Islands
Lamma is one of several outlying islands in Hong Kong. Ferries for Cheung Chau, Lantau and Peng Chau leave from the piers in front of the International Finance Centre. There are more islands to explore in the northern and eastern parts of Hong Kong. To find out more, visit www.discoverhongkong.com.

Ferries and transport
To get to the ferry piers from Chek Lap Kok International Airport, take the Airport Express to Hong Kong Station (HK$100 (US$12.80) one-way) and follow the signs. Hong Kong Station is linked to Central subway station, which is, as the name suggests, very central.