When the French Cultural Center opened in Korea in 1968, it was a revelation among local cinephiles.
The phenomenon came as an unusual event. The 1960s is often considered the heyday of Korean cinema.
The average number of local moviegoers reached record-breaking numbers from 1966 to 1970, according to a local media source. An average of 200 Korean films were shot and released per year. Even then, the films released in local theaters only helped to raise the demand for European arthouse cinema here.
The reason was clear: Films in local theaters were heavily controlled and censored by the government, and the majority were Hollywood features or anti-communist Korean films.
“There was a certain beauty in the idea of visiting the center’s organized screenings back in those days,” recounts Jeong Ji-young, director of historical epics like “White Badge” and “South Korean Army (Nambugun)” among others. “You had to be in a certain place at a certain time of day to watch those films. There was a definite sense of cultural desire.” 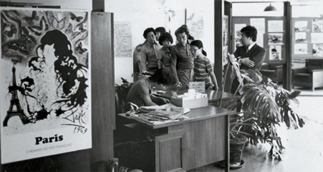 The former French Cultural Center in Sagan-dong across from Gyeongbok Palace, left, and right, inside the center. [JoongAng Ilbo]

Jeong and other noted directors, critics and scholars of French culture are considered the first generation of Korean intellectuals nurtured by the French Cultural Center, which celebrates its 40th anniversary this month.
The center had an unparalleled influence on the local arts scene, especially in film. The place started with 3,000 books, 600 films and five employees. By the mid 1970s, over 400 people visited the place every day and the center’s cinematheque held daily screenings, four times a day.
“On a good day, I remember visitors would line up from Sagan-dong to the intersection of Insa-dong,” says one observer who is affiliated with the center. “Police would approach us to control the traffic. Many of the visitors then make up the Korean film industry now. The center built a foundation for Korean cinema.”
Jean-Luc Maslin, the director of the French Cultural Center, agrees. During the 1970s and 1980s, he believes blooming social liberalization and rise of tolerance at home led to the peak of cultural diplomacy abroad, especially in Asia. 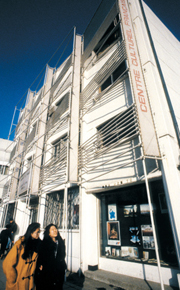 “For two decades during the years of dictatorship here, the center was a window of freedom,” says Maslin, who came to Korea three years ago. “It was the only place where people could get access to authentic and uncensored documents or films.”
That role has changed over the past few years as overseas content has become more common.
The cultural attitude toward academicism, which typically dominates French films and literature here, demands a different approach to reach audiences. In a way, the center has entered a new phase.
“We’re no longer some special place with unique content anymore,” he says. “But we keep doing our best to satisfy the curiosity and thirst for knowledge among the people here.”