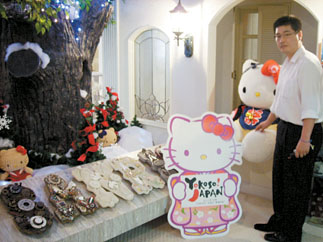 A Hello Kitty cutout holding a “Yokoso! Japan” (Welcome to Japan!) sign on the 20th floor of the Tokyo Sanrio building. [JoongAng Ilbo]

Sanrio’s Hello Kitty has set a high standard for her followers. Her image is everywhere ? from plastic purses to notebooks and pillow cases.
Created in 1974, the cute cat has become one of the representative images of Japan.
Japan’s Ministry of Land, Infrastructure and Transport even uses her for public relations purposes.
The Korean character industry is gaining ground on the industry’s best, but there are many lessons to be learned from Japan.
The Hello Kitty character first came to the public’s attention in Japan in 1975.
Over the years, the puss’s popularity has grown into a huge industry.
There are thought to be over 50,000 Hello Kitty-related products sold in over 60 countries.

The company has accumulated 93.9 billion yen ($873.36 million) in sales.
Last year’s sales rose from 22.5 billion yen in 2006 to 28.4 billion yen.
“Since 2000, the sale of Hello Kitty in Japan has been decreasing but our sales figure overseas has been steadily increasing over the past three to four years,” said Domatsu Gazuo, head of public relations at Sanrio.
The Japanese company has targeted North America and Asia in the past.
But other regions such as Europe, Brazil, Russia, China and India have fallen for the kitty lately.

Sanrio is known for its high standards. Every last detail is checked on the character, down to the length of a whisker.
“Character business is image business,” stated Lee Gae-hoon of Sanrio Korea, explaining that the company lectures its employees about the need for moral values and citizenship.
Now a generation old, Kitty is reaching out to a different range of age groups. Neckties bearing the Hello Kitty image are produced, and Sanrio has plans to create merchandise aimed at senior citizens.
Sanrio has employed another approach to its marketing strategy over the years. It depends on, and exalts in, its Made in Japan label to increase its product value.

Other companies look to make a profit by using cheap labor, often in underdeveloped countries where corporations can exploit labor.
In contrast, Sanrio has gained the respect of its consumers through a label that is synonymous with excellence.
The company also learned recently through a survey that the most sought after gifts for visitors to Japan are Hello Kitty products.
Sanrio has decided to produce a line of products available only in Japan, making the items rare and thus invaluable for consumers and collectors.
Korean characters have been recognized overseas recently, but they are at a beginning stage in comparison to the work of Sanrio and Hello Kitty.
Sanrio has spent the last 30 years perfecting its character and it is still making plans to develop its merchandise and customer base worldwide.