How high will the Pucca man fly his babies?

How high will the Pucca man fly his babies? 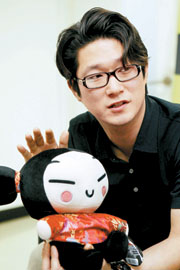 Kim Bu-gyeong and his sister set up the company that created the character Pucca. [JoongAng Ilbo]

The biggest success story in the Korean character industry is Pucca creator Kim Bu-gyeong who created the company Vooz in 1999 with his younger sister.
Vooz employs 60 people and has created 3,000 different Pucca characters and related merchandise, which can be found in over 150 countries.
Pucca is now threatening to overtake a market long-dominated by Mickey Mouse and Hello Kitty.
Last year alone, Pucca brought in 250 billion won ($25 million), but despite his success, Kim, 36, has even greater aspirations.
“I want Pucca to become a household name in Korea,” said Kim.
A lot of people think Pucca and her male companion Garu are Chinese.
“Pucca and Garu don’t have a nationality. Pucca is the lone daughter of a Chinese restaurant owner who loves jjajangmyeon [black bean paste noodles] and Garu is a martial arts trainee. That’s about it as background information goes. The rest is totally up to the imagination of the consumers,” said Kim.

In explaining how he came to create the two characters, Kim says he wanted to create a marketable character and had females in their teens and 20s in mind.
“I thought about what the target audience liked. They’re interested in love stories. I thought it would be funny to switch the traditional role of lovers in the relationship between Pucca and Garu,” Kim says.
Kim marketed his characters online using Flash-animated e-cards, impressing the intended target consumers.
Kim was not successful from the beginning. He initially created a rabbit and turtle character for a webzine.
“I was able to reach a contractual agreement with a company but the project had some difficulties and the company recently went bankrupt,” Kim says.
That wasn’t the end of the troubling times. Potential investors were not very keen on the venture and some buyers were set against human characters and bold colors.

“The Korean character market was influenced by the Japanese market at that point. Companies either tried to emulate Japanese characters or just imported from Japan,” he says.
Despite negative feedback and a lack of interest in a virtually nonexistent market, Kim held firm to his beliefs.
He started to attend shows where he could meet influential buyers.
That was the initial stage of Kim’s marketing strategy and eventually he was able to lead his company into the European market with strong support from Disney affiliate Buena Vista, which currently holds the Pucca distribution rights.
Disney shows the Pucca cartoon on its TV channel and covers 90 percent of production costs, sharing half the profits with Kim and his company.
What differentiates Pucca from other characters and what makes her such a hot item?
“High quality is at the core of our production and marketing strategy. Our characters are a bit more costly than our competitors’ and I believe this helped us to land a deal with Benetton,” says Kim.

Consumers will be able to purchase Pucca fashion at Benetton shops in the upcoming fall and winter season.
Quality control is also crucial aspect. Half of the staff in Kim’s company are designers and minor design changes are made to the characters on a yearly basis.
Kim’s opened an indoor theme park in Daegu in March and branches in Seoul and other cities around the country are slated for opening in the near future.
That’s not all, keep your eyes open for Pucca fashion shops and Chinese restaurants in the near future.
You never know, but Pucca could one day rival the likes of Hello Kitty and the Disney characters.
Kim’s definitely heading in the right direction.