[TV review]Smashing watermelons in the name of love

[TV review]Smashing watermelons in the name of love 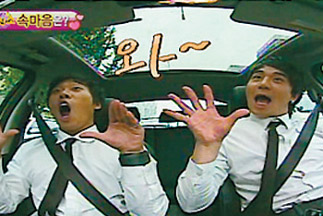 It’s a rough world out there, folks, especially in the singles’ market where men and women harbor a simple yet difficult dream of finding a significant other.

In this jungle where only the fittest survive, everyone is hungry for a date, ready to do (almost) anything.

But the hunting ground is surrounded by thorny paths that leave singles with memories of nightmarish blind dates.

“Where on Earth is my significant other?” is the cry.

Am I being too dramatic here?

Well, I have a good reason if I am.

I just had a bitter lesson watching a matchmaking show, “Introducing Stars’ Friends.”

Airing Saturdays at 5:30 p.m. on MBC-TV, the show does not just “introduce” friends of the celebrities.

It’s the latest version of a blind date show and debuted last month with an episode that saw celebrities setting up their friends.

The Korean TV scene, as you might have guessed, has a long history of matchmaking shows, and there have been countless formats over the years.

One show that enjoyed legendary longevity was “Studio of Love” that was popular in the 1990s.

A popular show in more recent times is “We Are Married,” which features the fake yet feel-so-real married lives of celebrities.

After all, finding your significant other and playing the game of love is an eternal mystery, and ideal material for TV.

Coming back to this latest MBC-TV show, the friends and the celebrities are more than ready to pass through fire and water in order to attract the interest of a member of the opposite sex.

Like goods in the supermarket, they try their best to sell themselves.

The hosts of the show ask the show’s participants to do a number of tricks, such as hula hooping with their necks in public or smashing watermelons with their bare hands.

These tasks are the average rites of passage to impress potential dates.

First, the show opens with the celebrities sitting with the hosts and bringing in their friends one at a time.

The friends can only come onto the stage if they pass a test. The hosts ask the celebrities to call their friends, who are waiting on the street near the studio, and give the “missions.”

Last Saturday, the friends were asked to pull off funny dance moves on the downtown streets, ask passersby for a sip of their drinks and pose like a supermodel behind a cart deserted near a tree.

Once the friends have completed these tasks, they are allowed into the studio.

It’s worth noting, though, that the celebrities’ parents would not be happy to see their precious sons and daughters completing these missions.

But the stars don’t care, as long as they can grab some attention.

Next, the friends have to divulge basic information such as job descriptions, age and family backgrounds.

Then they move on to the second stage, which is more like a talent show. They sing, dance or do anything to make an impression.

The third stage is a dinner date the women choose from among the friends.

The final stage is crunch time when decisions get made.

One hard-earned lesson from one hour of the show is that it’s so difficult to finally nab a significant other.

At first I thought that I’d rather remain single than be forced to dance on the street in front of hundreds of passersby or smash watermelons with clenched fists.

But it’s also not the most pleasant experience to be reading a book at a cafe on a Saturday evening filled with couples on blind dates.

This show is categorized as entertainment, but in truth, it’s more like a documentary about nature and the complicated rules of survival.