Opposites attract in the pet house

Opposites attract in the pet house 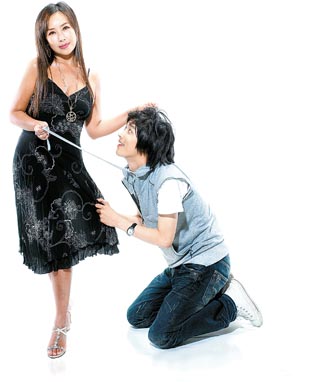 A couple from the reality TV program, “Raising a Pet? I’m a Pet.” [JoongAng Ilbo]

The idea of a single person rooming with the opposite sex is traditionally frowned upon in a Korean culture.

Until the 1970s and 1980s, men and women living together before marriage did so under special circumstances that prevented them from tying the knot.

Whether for economic reasons or because of strong parental opposition, a couple living under the same roof before marriage was not common. They usually did so with the intention of getting the formalities completed in the near future.

But a new trend began in the 1990s. Couples in their 20s and 30s began cohabiting before marriage to see if they were compatible. 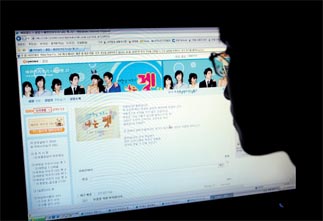 Prospective roommates find each other through Web sites. By Shin Dong-yeun

The liberal-thinking generation thought it was better to discover everything there is to know about their significant other before making a lifelong commitment.

The idea of respecting the roommate’s lifestyle through a contract was introduced around this time. With the advent of the Internet, “linking” men and women who don’t know each other has been on the increase since 2000. A young university crowd makes up the majority.

The potential pets post their background and basic information on Web sites and lonely women in need of someone to do household chores contact them.

The basic daily duties and responsibilities are rather simple. Pets wake 30 minutes prior to their owner and prepare breakfast.

The contractual agreements that bind the roommates often include clauses that forbid the pet from entering the owner’s room and the need to request permission for outings.

The reasons for the growing interest in such agreements, even though they seem rather disadvantageous to men, vary. Such a question was put to 20 applicants who posted their personal information on Web sites that link roommates.

Some mentioned that they simply wanted to get away from their family and try living with the opposite sex. One said he wanted to find out what it felt like to obey and submit to a woman. Another potential pet had an economic motive as he said it simply paid better than most part-time jobs.

Others mentioned that watching reality shows or TV soap operas tweaked their interest and they wanted to try it themselves.

“Whereas in the past people prioritized face-to-face meetings and physical contact in relationships or friendships, new technology and changes in society mean people prefer to look for compatible people online,” explained Kim Moon-jo, a professor of sociology at Korea University.

According to the survey, 74 percent of the students polled said it was possible to live with their girlfriends or boyfriends prior to marriage.

More interestingly, 30 percent said it was possible to live with such a partner without any extenuating circumstances, adding that it was even possible to shack up with a stranger.

The growing number of people seeking men and women they didn’t know before as roommates could be attributed to the influential role the mass media has played over the years.

While the prevailing attitude until the mid-1990s on the topic of rooming with a lover was very negative, the portrayal of such situations or relationships has been presented in a positive light over the past few years.

Kim Soon-heung of the Korea Social Research Center says the mass media, especially TV programs, are influential in changing how people think. “We can also see the new trend as evidence of a gradual disappearance of traditional Confucian values in our society,” said Kim.

A reality TV program that has played an integral part in the growing interest in strangers is “Raising a Pet? I’m a Pet.” The show introduced different couples and their lifestyles as well as funny episodes that result from rooming with strangers of the opposite sex. The show was a hit and caused quite a stir among the younger crowd, evidenced by the popularity of show-related topics that appear on different search engines.

I’m a Pet has become so popular that the search for participants for the upcoming fourth season turned up 2,200 applications. Another popular TV program on MBC, “We Got Married,” is also helping to soften views.

Various Web sites started in 2003 following the popularity of the TV soap opera “Cat on a Rooftop,” which has seen a second wave of popularity as of late.

This year alone saw 10 new Web sites talk about the idea of male pets and the most popular of the bunch boasts 2,400 members.

Ham In-hee, a professor of sociology at Ewha Womans University, had an interesting take on the new phenomenon among the university students. “One of the reasons for the growth in rooming with the opposite sex is due to the decrease in sexist ideas and discrimination among university students,” Ham argued.

Most people rooming with someone of the opposite sex might argue that it is perfectly possible for a man and a woman to live together in a platonic relationship, but in reality sex happens.

Some women have admitted that sexual relationships naturally occur over time as they become more comfortable with their pets. Some have even included clauses that relate to such matters in their contracts.

Not everyone is impressed, though. Academics like Kim Mi-ra of Seoul Women’s University’s visual media department believe that a positive image of pets and owners in the media has a negative impact on the people watching.

“One of the problems with reality TV programs is that the relationships between the sexes seen through contracts and in a game-like manner encourage a lack of responsibility and poor decision-making skills among viewers,” Kim said,