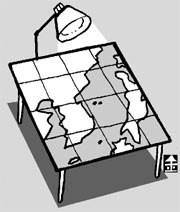 Between 1947 and 1952, one person held the three most important posts that a civilian American could have in Tokyo. William J. Sebald (1901-80) was the U.S. Department of State’s political adviser in Japan, foreign affairs director of the Allied Forces Supreme Commander and representative of the United States to the Allied Forces’ Board of Directors in Japan. Jeong Byeong-jun, a professor at
Mokpo University, views Sebald as the primary figure who started the argument
between Korea and Japan over the Dokdo islets. This is from a paper printed in the summer 2005 edition of the quarterly publication, “Yeoksa Bipyeong,” or “Criticizing History.”

Sebald studied at the U.S. Naval Academy and was appointed as U.S. military attaché to Japan in 1925.
He studied Japanese for three years and married a second-generation English-Japanese woman whose father was an English lawyer and the mother a Japanese painter. In 1930, he was discharged from the service, acquired a license to practice law in the United States and took over the Kobe Law Firm that his father-in-law managed in Japan.

Having completed his military service during World War II, he was appointed as a special assistant to the political adviser of the Allied Forces Supreme Commander in Tokyo in 1945. In 1946, having passed a special exam, he qualified as a diplomat. To him, Japan was an orderly society of polite and diligent people; he was impressed by the frugal aspects of society there. He was personally close to the Japanese imperial family, high-ranking officers and politicians. He co sidered Shigeru Yoshida the Winston Churchill of Japan.

The problem is he exercised influence when the Allied Forces and Japan were preparing a peace treaty. In the first to the fifth drafts of the U.S. peace treaty, Dokdo was referred to as Korean territory. However, Sebald proposed to the U.S. Department of State that Dokdo be categorized as Japanese.

“Japan has long claimed the island and it seems just. It is difficult to view it as an island close to Korea.” He even sent to the United States a book written by the Japanese Foreign Ministry that claimed the island as Japan’s property. The U.S. Department of State accepted the proposal. Starting from the sixth draft to the ninth, it included Dokdo as belonging to Japan. However, the United
Kingdom and Australia were opposed to the claim, and the United States stepped back. In the end, in the San Francisco Peace Treaty signed in September 1951, Dokdo was not mentioned at all. Based on this treaty, Japan began to claim ownership over Dokdo.

In November 1954, Japan asked Sebald, who was U.S. State Department Assistant
Secretary responsible for the Far East, about the U.S. stance on bringing a lawsuit on the Dokdo issue to the International Court of Justice.
“It is better if the two sides solve the problem instead of bringing a lawsuit,” he said. But he sided with Japan and the problem remains a stumbling block to friendly neighborly relations.