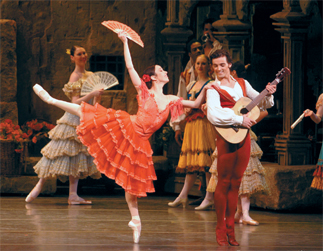 The American Ballet Theatre will perform “Don Quixote” at the Sejong Center for the Performing Arts this weekend. Provided by the organizer

Local ballet fans will get plenty of world-class pointes, plies and pirouettes this weekend as one of the world’s most prestigious ballet troupes comes to town.

The American Ballet Theatre will perform in Seoul this week in celebration of the 30th anniversary of the Sejong Center for the Performing Arts, one of major performing arts venues in the capital. This will be the corps’ first visit to Korea since 1996.

Founded in 1939, the American Ballet Theatre has performed in more than 130 cities in 40 countries around the world. It is considered one of the world’s leading ballet production companies along with the Royal Ballet in the United Kingdom and the Paris Opera Ballet.

The company has sought to encourage contemporary interpretations of classical ballet repertoires, appointing young choreographers as artistic directors. In 1992, the American Ballet Theatre appointed Kevin McKenzie, a former principal dancer with the company, as its new art director. 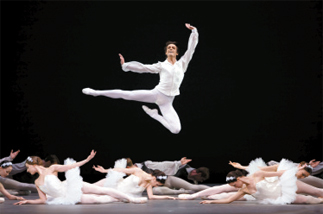 The opening gala tonight will showcase “Etudes,” above, and “Rabbit and Rogue.” Provided by the organizer

Speaking to reporters in Seoul on Tuesday, McKenzie said while all ballet productions today try to seek something new from the classical repertoire, what differentiates his company is the harmony that exists within diversity.

“We are not here just as dancers to perform, but as cultural ambassadors,” McKenzie said.

Etudes, choreographed by Danish choreographer Harald Lander (1905- 1971), explores the art and techniques of ballet in a ballet class setting. Rabbit and Rogue, a collaboration of award-winning choreographer Twyla Tharp and celebrated Hollywood composer Danny Elfman, is an experimental piece.

The production’s main act will be the all-time favorite “Don Quixote,” a comedy about the adventures of the Spanish knight and his trusty squire, Sancho Panza. The American Ballet Theatre’s version will portray the love story of delightful maiden Kitri and poor barber Basilio that Don Quixote encounters on his journey.

“I have performed in ‘Don Quixote’ so many times, but whenever I do, it’s a whole new experience. I hope Korean fans will be able to feel the same excitement,” said Paloma Herrera, principal dancer in the troupe who will play Kitri on Friday.