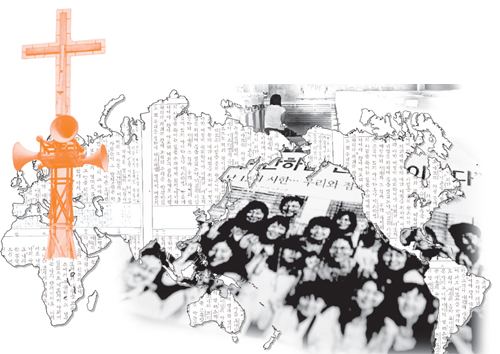 Time is not always a great healer.

A year ago Yoo Kyung-shik was one of 23 Korean missionaries taken hostage by the Taliban in Afghanistan. He was eventually released, but he has suffered post-traumatic stress since returning home on Sept. 2, 2007.

Yoo and the other survivors have sought psychiatric treatment to help them recover.

“The public’s critical response hurts me the most,” Yoo admits. “People said we were rash and insensitive. They treated us like fanatics.”

But Yoo and the others were lucky. The kidnapping left two men dead, including Pastor Bae Hyung-kyu, the leader of their short-term missionary trip to Afghanistan.

The Saemmul Presbyterian Church in Bundang, Gyeonggi, that organized the ill-fated mission to Afghanistan, held a special ceremony last weekend for Bae and Shim Seong-min, the other executed hostage.

There has also been a 42-day prayer service every morning since July 13, the date the volunteers left for Kabul last year. The prayers are expected to continue until Aug. 23.

Saemmul said it will hold a special service on every fourth Sunday in July in remembrance of the victims.

Korea was gripped by the hostage saga last summer, but not everyone was happy with the way the missionaries conducted themselves.

There was a lot of criticism leveled at the church for ignoring warnings not to visit Afghanistan. There was also widespread exasperation over speculation that the Korean government paid a $20 million ransom to the Taliban.

Criticism came from all quarters, even from the Christian community in Korea. They complained that the 23 volunteers had damaged the image of all Christian missionaries, he said.

From Yoo’s point of view, though, the group knew what it was getting into. The Saemmul church was in touch with Korean missionaries in Afghanistan long before the mission was arranged, he said.

It even had seven long-term missionaries working in Afghanistan prior to July last year: three in the north and four in the south of the landlocked nation. These volunteers were providing Afghan children with medical aid and teaching English, computer and sewing skills.

“Despite our sacrifice and pain, we love Afghanistan,” he said. “The people we met were unforgettable. Only God knows when we can meet again.”

Korea has over 14,000 Christian missionaries currently working abroad, according to a survey by the Korea Research Institute for Missions, a non-denominational organization.

That number would double if you include the short-term missionaries who serve for two years or less.

Christian missionaries from Korea, though, are not an overnight phenomenon. Their history goes back more than 100 years to when Korea began to open up its doors to the rest of the world.

“I think many conservative Korean churches feel indebted to the early American missionaries,” says Kim Kyoung-jae, a retired professor at Hanshin University, a school known for teaching a liberal brand of theology.

“They believe that Korea wouldn’t have gained independence from Japan or fully recovered from the Korean War without the support of American churches. To them, Christian expansion here is considered a social blessing. That is why you see the elders of mainstream Korean churches showing absolute loyalty to America,” Kim says.

Christian leaders, including elders and pastors at mainstream churches, remember the aid that American churches sent after the Korean War (1950-1953), which fuels a sense of gratitude.

Over the years, conservative Christians here have subsequently grown deep political roots. President Lee Myung-bak, a 65-year-old church elder, is often described by his political rivals as a pro-American conservative. When he was the mayor of Seoul, Lee said he would “offer the city of Seoul to God” at one Christian gathering, which caused some controversy.

Protestant missionaries first arrived in Korea in 1884, a period known as the nation’s enlightenment. Most were Americans although a few were from Canada and Australia. Their involvement in medical work and Western education played a central role in modernizing Korean culture and spreading Christianity here.

They set up schools and hospitals, and their impact can still be felt today. Yonsei University, for example, considered one of Korea’s top schools, was set up by Christian missionaries in 1885.

Christianity grew in popularity over the years, but the Protestant church grew rapidly during the 1970s and 1980s. This was a period of industrialization under right-wing governments, which maintained close links with the conservative churches.

Retreats and large-scale churches were built during those years and the number of Christians surged.

Over 1 million attended a Billy Graham service in Seoul in 1973.

But towards the end of the 1980s, according to the book “Insolent Gospel,” about overseas missionary work in Korean churches after the Afghanistan incident, the rapid expansion began to taper off, presumably because a point of critical mass had been reached.

What’s more, a survey by the National Statistical Office showed that the number of Protestants in Korea fell by 0.4 percent from 1990 to 2000, but the number of Buddhists rose by 1.9 percent during the same period.

Another contributing factor is that the Korean government loosened travel restrictions after the 1988 Seoul Olympics, allowing more missionaries to go overseas.

The churches’ determination to expand its missions overseas drew criticism, though. One major concern was that the missionary work was heavily driven by competition and scale, and that this type of overseas work was used to urge church congregations to donate more money.

“Some local churches take extreme measures because people tend to give more help and to pay more attention to missionaries who go to dangerous places like Afghanistan, even if it means lives will be put at risk,” says a senior researcher at the institute for Missions.

The institute recommends safety measures and offers cultural training for Korean missionaries who are going abroad.

Another factor that has been put forward to explain the breadth and fervor of Korean overseas missionary work is the nature of the Korean character.

Some observers say Koreans tend to overemphasize issues that they feel right about, raising them to a heightened level of spirituality, a level of passion that is perhaps less prevalent in other countries.

Kim, the professor at Hanshin University and a member of the clergy, calls this spiritual identity of Koreans “a revival-driven sect.”

“They [Koreans] get emotional easily but the danger is that this leads to religious fanaticism,” Kim says.

In the book Insolent Gospel, the authors say Korean Christians don’t harbor enough respect for other religions when they travel abroad, arguing that they try to convert others as quickly as possible.

“For them, it’s like a military command,” says Kim Nami, whose doctoral thesis at the Academy of Korean Studies concerns interfaith dialogue in Korea. “They are willing to convert non-Christians no matter what it takes.”

Several years ago, Kim wrote a research paper at the Stanford Center for Buddhist Studies at Stanford University on why so many Americans were turning to Buddhism. She found that the spiritual openness and the silence inherent in the Buddha’s teaching drew more people into the religion.

Many experts agree that Korean churches today follow the same evangelical approach as American missionaries to Korea during the 19th century. But the problem is many Koreans in an increasingly postmodern age prefer pluralism over a strident form of evangelism.

“Korean churches need to redefine the whole notion of evangelism,” says Kim, the professor at Hanshin. “Otherwise they are not going to reclaim their credibility. People respected Protestant missionaries and they converted after seeing their work with the poor and sick, not through the words of the missionaries.”

For the majority of missionary communities, however, cultural differences create spiritual barriers. In China, the authorities regard Christian missionaries as problematic, according to Jung In-sook, a Korean missionary in Shanghai who has been helping to set up informal churches there for 12 years.

“The Chinese consider missionaries a subject of disgrace and shame,” Jung said. “They believe that missionaries visit their country with a political purpose to open its doors.”

Meanwhile, the Korean government put up a travel ban for Afghanistan, Somalia and Iraq in July 2007 to avoid a repeat hostage crisis.

“Korean churches and missionary groups learned a lesson,” said Kim Jong-ho, an official from the Christian Council of Korea. “They are now more cautious of any shameful or disgraceful happenings while on their trips. Missionary training is crucial. It will lower risks caused by lack of cultural knowledge or communication.”

Since the Afghanistan incident, short-term missionary trips by local churches are on a visible decline, according to an official at the Korea Research Institute for Missions.