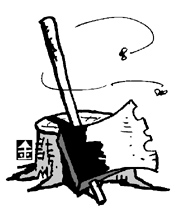 “Three Hundred Tang Poems” published during the Qing Dynasty is an ancient book where we can have an overview of major poems of the Tang Dynasty. There are 22 poems in this book. Of these, meticulous description of emotions is characteristic of poems by Li Shangyin, the fourth greatest poet of the Tang Dynasty.

He is also famous for writing poems about love, and usually gave them no title. In one of his poems is this verse: “Difficult when we meet and difficult when we part / spring wind is weak that flowers wither.”

Spring wind is the source of strength for flowers. It signifies that if important places lose strength, the rest also cannot but wither. The poet described his impotence, not being able to meet his love, but Li’s verse is used differently nowadays in China.

If major stocks plummet in the stock market and lead other stocks to collapse as well, this verse is used to describe the situation. Politically, it can be used to describe when a core organization is not functioning properly and leads to problems in the overarching policies.

Li’s poem makes us reminisce about the pervasive impotence felt in South Korean politics. The police did not properly respond to about 1,500 demonstrators illegally marching in the streets. Police seem to think that if they are not beaten up, then it is all right. The government that had put forth reform of public firms as its major policy has postponed the task, afraid of public criticism.

There are problems not only within South Korea. At Japan’s claim over the Dokdo islets, the government showed impotence. And at the Asean Regional Forum, it did not properly manage North Korea’s diplomatic attacks. The impotence shown in and outside South Korea is like a leaking roof during the monsoon season.

Li, who mainly used aesthetic and languid descriptions, was a poet at the waning of a century. We don’t need to explain why his depressing poem is a reflection of this government. The ruling party leader at the National Assembly lamented, “It is so frustrating that I don’t know why we changed administrations.”

We must find the source of this impotence. If the Blue House is not playing its role properly, then it is like a weak spring wind. If it does not correctly set principles for major issues, the result is obvious. We wonder if it has the will to control the symptoms.