Building up to Beijing

Building up to Beijing 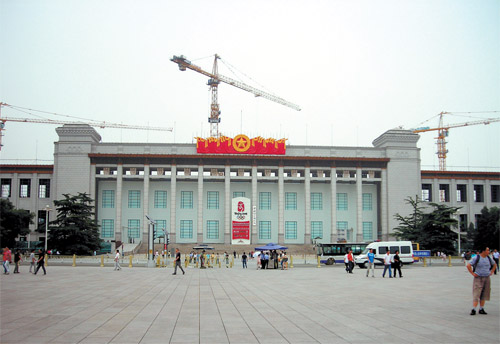 The Great Hall of the People, adjacent to Tiananmen Square, displays the Olympic countdown clock and a cluster of construction cranes. All photos by Hannah Bae

The Olympics are coming, and the spirit of change or at least construction ? is underfoot in the Chinese capital. 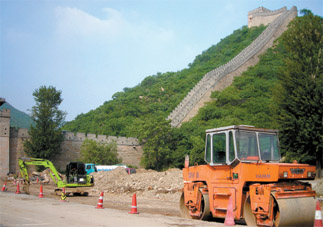 The state of the construction at the Great Wall at Shuiguan

On my visit to Beijing in mid-June, unfinished projects seemed to be everywhere: There was the half-done CCTV Tower downtown, the mud-mired Olympics facilities and even turned-up earth at the Great Wall at Badaling. But despite tromping through construction sites to see the sights, Beijing is undeniably a fantastic destination for a vacation of manic sightseeing.

Plus, not everything is under construction. Tiananmen Square, the Summer Palace, Qianmen and the National Theater (or “The Egg,” as it’s commonly called) were in good shape and open for business. 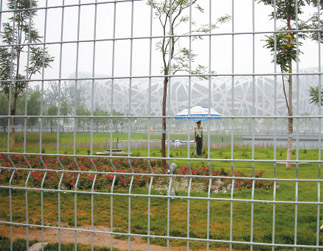 The fenced-off and carefully guarded National Stadium, also known as the Bird’s Nest

And to Beijing’s credit, the construction is a physical representation of the city’s dramatic transformation.

The first high-profile building that most Olympics tourists will encounter is the new Terminal 3 at Beijing Capital Airport. Unfortunately, for flights to and from Korea, or at least for mine on China Eastern, passengers are banished to the old and rather dingy Terminals 1 and 2. 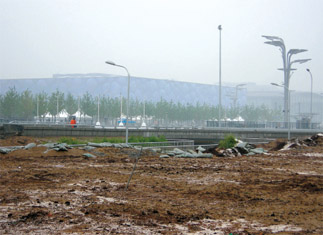 The construction site immediately surrounding the Water Cube, or National Aquatics Center, at the Olympic park. All photos were taken in mid-June.

There are also, of course, the aforementioned Egg and CCTV Tower, which looked like a gigantic glass chair with a huge hole cut out of the seat, and the National Aquatics Center and the Olympic Stadium, or the Water Cube and Bird’s Nest, respectively.

Beijing’s pollution, as seen in the hazy opening ceremonies of the Athletes’ Village on Sunday, hasn’t shown dramatic signs of lightening up, despite government measures to clear the air.

Thus, the pollution can literally cast a cloud over your plans of taking a gander at the Water Cube and Bird’s Nest. But for me, while gray skies reduce the Water Cube’s vivid cerulean coloring to a dusty blue, the building’s reptilian skin is unlike anything I’ve ever seen. As for the Bird’s Nest, the overcast skies don’t detract from the steel structure’s intrinsic tension: the building looks remarkably like its been lashed together and then seamlessly fused.

At the time of my visit, you couldn’t get within a stone’s throw of the buildings, thanks to the communist guards flanking the parking lot’s perimeter, but you could, like the flocks of Chinese, slip under construction tape, stand outside the fence and snap photos through the wire links.

So how do the Chinese feel about the nearing Olympics?

“Reaction by locals to the Olympics when asked by a foreigner ranges from a few enthusiastic outbursts, to mostly a stock monotone answer that sounds like it came from a central script: ‘I am excited. The Olympics symbolize a grand rebirth and opportunity for China on the world stage,’” said a copy editor at a major English-language daily newspaper in Beijing who did not wish to use his name.

But when looking at these buildings, one can’t escape the feeling that they’re in the presence of something monumental.

Also, by now, “construction for the Olympic facilities is completed as far as I can tell. I haven’t seen or heard anything that indicates otherwise,” the copy editor said this week. The Olympic park isn’t an ideal tourist destination for those without tickets to the Games, but it is worth the 35 RMB ($5.13) taxi ride from the city’s center to see with your own eyes.

But for visitors not bitten by the Olympics bug, the Houhai area, a curve of connected lakes in central Beijing, is ideal. Despite the rain, the cobblestone plaza between Qianhai and the North Sea Lake was teeming with people.

There were clusters of Chinese using the open space as a dog park for their handsome pooches, fluffier than the rat dogs I see scurrying around Seoul, as well as wide circles of amazingly acrobatic people playing hacky sack with jangly shuttlecocks adorned with jewel-toned feathers. Of course, there were expats also hanging out in gaggles, staying entertained by taking photos of themselves with the shuttlecocks goofily perched atop their heads.

Paddleboats rippled the surface of Qianhai, while those taking leisurely strolls around the banks occasionally succumbed to the persuasive restaurant hosts boasting their eats.

Take a turn away from the lakes and you could end up in a hutong, one of the disappearing alleyways on Beijing’s back streets. Although the hutong look sort of like flatter versions of the run-down streets of Haebangchon here in Seoul, behind their walls are traditional courtyard homes for families. Sadly, the city’s rapid development is displacing many of the hutong’s residents.

Nearby are the Drum and Bell Towers, which are also a popular leisure spot for Beijingers. There are also a number of good nightspots, including the Drum and Bell bar, which has a moonlit rooftop among a canopy of trees where one can enjoy a beer and some cigars, and the shack next door that was blasting live samba the night I visited.

Of course, a trip to Beijing is not complete without a trek along the Great Wall, which, as Megan Mitchell, an expat resident of Dalian, China said, “is the least underwhelming thing in China.”

For those short on time and looking for less exertion, the Great Wall at Badaling works, although it’s generally crowded with tourists and pushy souvenir vendors. But, little known to most visitors, there are two parts of Badaling, which is the part of the Wall closest to Beijing. There’s Badaling proper, which is a properly developed tourist site, and then Shuiguan.

When my driver rolled up to the “parking lot,” er, dirt construction site around the Shuiguan section, my friends and I were sure we were lost. But sure enough, there was a ticket office, where I got a student price with my long-expired ID for a mere 15 RMB. The regular ticket is 30 RMB. For about $2.20, I was able to climb this nearly deserted part of the Wall, where the few souvenir vendors weren’t aggressive in the least.

At Shuiguan, the higher one climbs, the less developed the Wall becomes. Near the parking lot, the Wall just consists of some clear, if rather steep, stairs. But as you go further, the fragrance of grass wafts stronger, the stairs grow steeper and more crumbled and the views are much more spectacular.

While you will sweat and pant, and you may have to watch out for bees and bugs, the climb is very pleasant. Once we’d climbed the farthest we could, we encountered an exceptionally friendly guard who snapped our photos and insisted we try some wild berries he’d picked.

But a word of warning for would-be Great Wall climbers: Many tours will include a visit to the Ming Tombs in a Great Wall trip. Avoid the tombs. Unlike the Great Wall at Shuiguan, there’s a reason why the tombs are deserted: They are a tourist trap with nothing remarkable to offer. Admission is 65 RMB, and the cold, empty stone rooms are not worth it. That money would be much better spent touring the gorgeous Summer Palace or Forbidden City.

So now that the Games are just over a week away, is everything done?

“I wouldn’t say that construction has calmed down or that everything is done. Actually, I would say the opposite,” said Robert Braun, an English teacher at the Chinese Foreign Affairs University in Beijing, this week. “Everything that is close to being done is being rushed to completion. In the last week or so, new shopping malls have been opening bit by bit. I suspect they will be completely open by the time the Olympics start.”

Tips for your trip


Although not many Chinese in Beijing speak English, you can usually at least pantomime your way through most interactions. But it is essential to have a guidebook with destinations printed in both English and Chinese.

If you’re staying in a hotel, make sure you have the address in Chinese, and have the concierge write your destination in Chinese. Taxi drivers, like in Seoul, are generally honest.

When flying into Beijing’s Capital Airport, the shuttle bus downtown comes highly recommended for speedy (about an hour) service to several destinations. Know where you want to go, tell the ticket seller and pay your very cheap 16 RMB fare. Announcements on the shuttle are in English and Chinese.

The Beijing subway is clearly marked in English and very easy to use. Tickets can be bought in automated booths for about 2 RMB each ride.

Various tour companies offer trips to the Great Wall, which can be found (along with many other helpful tips) at www.beijing-travel-guide.com. My driver, available at 139-105-27012, was excellent and gave a good rate of about 150 RMB per person for a full-day Great Wall trip.

Oh, and remember to bring toilet paper and hand sanitizer.