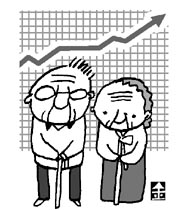 Since the ancestors of present-day humans appeared on Earth, the length of life of the average person has never exceeded 20 years through most of recorded time. The rate of increase in longevity remained constant at one year per century, increasing at a snail’s pace. As we entered the 20th century, Americans’ average life span was merely 45 years. However, it saw a rapid increase by 33 years during the past century. It was mainly because of dramatic drops in the nation’s infant and maternity mortality rates, and prevention programs against heart disease and stroke achieved remarkable results. In particular, the number of infants who died before their first birthday saw a rapid decrease from 10 to 15 percent, to 1 percent in the early 20th century, which served a pivotal role in raising American life expectancy. Japan is a more dramatic example. The average length of life in Japan during the 1940s was 50 years. Japanese life expectancy increased by 10 years every 20 years since the Second World War, and Japan continues to enjoy the best health and highest longevity rates in the world.

It is unlikely that lengthening humans’ lifespan will continue its upward trend in this century. Whereas developing countries such as China and Vietnam are able to make two-digit economic growth, it is difficult for developed countries to achieve growth of 2 to 4 percent. Even though someone makes the mortality rate of humans aged 50 years or younger null by magic, the average lifespan will rise by just 3.5 years. Professors Stuart Jay Olshansky and Bruce A. Carnes predicted in their book “The Quest for immortality”: “If the first revolution of life expectancy is completed, humans’ average life span will exceed 85 years.” They added the following premises to realize such dreams: a big fall in infant mortality in some countries or groups; no smoking and drinking; perfect protective inoculation; weight control by changing eating habits; regular physical exercise; wearing seat belts; safe sexual life; and guaranteeing both basic care and health insurance.

According to estimates released by the government, the average lifespan in Korea is 79.1 years. It exceeds the average in OECD countries, 78.9 years, and the gap with Japan(82.4 years) has already narrowed to 3.5 years. Lengthening average life expectancy may be a necessary and sufficient condition to be an advanced country, but it does not guarantee private happiness. What is more important is “life expectancy of health.” What is the greatest virtue in the era of average life expectancy exceeding 80 years and more than 30 years after retirement? Pay more attention to your health, even though there is an intense and long lasting heat wave.