Quest for the best bull semen

Quest for the best bull semen 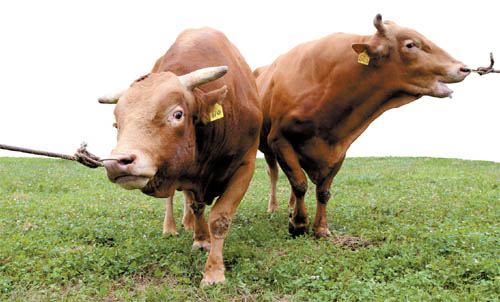 Which is the super bull? KPN626 is pictured right, at the Hanwoo Improvement Center in South Chungcheong, next to another potential breeder bull. [JoongAng Ilbo]

There are plenty of bulls used for breeding prime beef cattle at the Hanwoo Improvement Center in South Chungcheong Province, but KPN626 is master of his domain.

Semen from this super bull has been used to impregnate hundreds of cows around the country resulting 10,000 calves, according to officials.

Korean beef cattle has changed dramatically over the years. In the past, the cattle was on the skinny side compared to today’s bulkier animals. 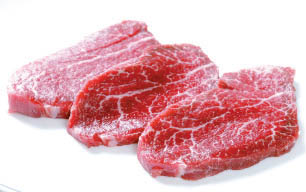 The ratio of first grade beef cattle among the total population of beef cattle has also increased over the years, as the breeding process has become more systematic, just as other areas of farming such as seed crop technology have improved over the past 25 years.

A decade ago, only 15.3 percent of beef cattle was stamped as first grade; now 50 percent make first grade.

For the first 10 years, the focus of the breeding process was simply on creating bigger cattle, but now it’s more about improving the quality of the meat, officials say.

“We estimate that we make at least 100 billion won ($98.6 million) every year because we have improved the quality of the bull used for semen distribution,” said Kim Si-dong, an official at the center.

The center is the country’s sole institution dedicated to the improvement of beef cattle. There are 50 bulls providing semen for beef cattle farms around the nation. Officials say the center is practically the “father” of all beef cattle ? an estimated 2 million ? throughout the country.

Nevertheless, this interbreeding can also cause problems. As semen is used from only 50 bulls nationwide, if inter breeding takes place with bloodlines too closely related, the calves born might be exposed to certain genetic diseases or may be born infertile.

That is why the center provides information on the bull when giving the semen to cattle farms.

Kim said the center keeps all DNA information when extracting semen from the bulls. “When there is a chance that bloodlines come too close, it is better to use semen from less closely related bulls,” said the doctor.

The farm ? actually a building ? where the country’s breeding bulls are kept feels more like a high-tech factory. Visitors have to pass through a cleaning process conducted at a separate space located at the entrance. They are sprayed with an antiseptic solution and have to stand in front of fans that remove dust and other potentially harmful organisms.

Visitors have to wear a white colored gown that covers the whole body from head to toe. Shoes are also covered.

“If one bull gets infected with germs, we have to kill the others. It would be a catastrophe for the entire beef cattle industry,” said Kim Jong-jib, an official at the center. Since the selected 50 bulls are special, they get top quality care.

Unlike conventional cattle farms, the bulls have their own stalls, an arrangement meant to prevent fighting among the bulls injuring themselves.

The bulls are fed mainly grass instead of the more widely used grain feed. “These bulls are for breeding purposes. We don’t need them as big. It’s better to have them in good health,” said Kim.

The process of selecting these breeding bulls is like a gladiator competition.

Twice every year, 200 six-month-old bulls from around the country come to the center to compete for a spot. They are fed the same diet and kept under the same conditions.

After six months, semen from the top 20 bulls in terms of health and weight is sent out to cattle farms. Two years later, the calves born from this semen are slaughtered and the quality of the beef tested.

The 10 bulls that produced the best quality calves are the ultimate winners and become the super breeding bulls. They produce semen two to three times per week for the next three years.

According to the National Institute of Animal Science, after three years the probability of interbreeding increases substantially.

The price for a bull selected through this process is an estimated 900 million won. The semen produced by such a bull is sold for 7.5 million won per dosage, and a bull is “milked” about 120,000 times throughout this period.

Nevertheless, after the three years are up the bulls are usually 8 years old and their quality of meat is a third grade, the lowest grade given to meat.