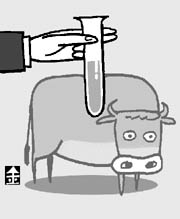 Silvio Funtowicz and Jerome Ravetz felt there were limitations to normal science in the late 20th century, and claimed we had entered the post-normal science phase. In this era, “facts are uncertain, values in dispute, stakes high and decisions urgent.” Important, highly dangerous and uncertain issues such as human cloning, genetically modified food and nuclear waste disposal require social consent.

A major characteristic of post-normal science is that the scientific unit has changed from a community of scientists to an extended group including civilians and interest groups. Scientific facts are not only based on results of traditional experimentation, but on extended information comprised of civilian experience and knowledge and the media’s in-depth reporting. A scientist’s activities are not confined to the laboratory, but include political compromise, discussion and persuasion.

Post-normal science is, in other words, science that has walked out of the laboratory. It is a science that has become democratized, a social forum for making policy decisions. Ulrich Beck called it “reflexive science.” American physicist Alvin Weinberg had already used the term “trans-science” in the 1970s. It means that something can be explained scientifically, but its answer also requires social considerations.

Science sociologist Hong Seong-uk said, “In the post-normal science paradigm, experts cannot solve problems of technical danger by concluding that since they are safe, inhabitants should follow.”

He asked the government and experts not to unilaterally convince the masses by providing information.

“In the post-normal science era, communication must be two-way. The government or experts should not presume that the masses’ view is emotional and subjective. The only solution lies in taking step by step a series of agreements reached with the extended peer community,” he writes in his scientific research.

Hong’s words show us why the government and some scientists were incapable of scientifically convincing the public about mad cow disease. In the post-normal science era, experts trying to quickly, unilaterally push their claims onto the people are doomed to fail.