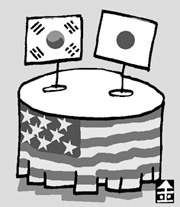 In 1904, 30-year-old Syngman Rhee crossed the Pacific Ocean on a boat and travelled across the U.S. by train to arrive in Washington, D.C.

His task was to save Korean independence against Japanese moves to colonize the Korean peninsula by appealing to the U.S. government and people for help.

Although Rhee was successful in meeting U.S. President Theodore Roosevelt (1858-1919) in August of the following year, Roosevelt was unlikely to listen to the complaints of a young man from a weak country. Even more so, considering that just five days before meeting Rhee, the United States and Japan had forged the Katsura-Taft Agreement where the U.S. had acknowledged Japan’s role in Korea.

Japan’s diplomacy with the United States was thoroughly meticulous. Japan’s special envoy, Kaneko Kentaro, who had come several months before Rhee to Washington, D.C., entered Harvard University in the same year as Roosevelt and even exchanged Christmas cards and letters with him. Kaneko went so far as to bring a judo coach for the sports-minded president. Roosevelt had read the English version of “Principles for Samurai” that Kaneko had given him as a gift and had fallen in love with Japan. Evidence that Japan’s successful “soft diplomacy” was well alive over a hundred years ago.

Article 1 of the Portsmouth Treaty between Russia and Japan, signed in August 1905 through the mediation of Roosevelt, acknowledged Japan’s political, military and economic hand in Korea. After having chased out the Russians from the Korean Peninsula, Japan got to take away Korea’s foreign diplomacy and forge the Korea-Japan Protectorate Treaty.

It was impossible for Syngman Rhee, who went to the United States for the first time relying on a few introductions from a missionary, to compete with and triumph over Kaneko from Harvard.

The U.S. Board of Geographic Name’s Dokdo designation has been restored to what it was before having defined Dokdo as a disputed territory. However, we shouldn’t be praising ourselves for having won this diplomatic battle. It is simply reverting back to what it was and nothing has changed. The U.S. position that it will keep its neutrality is also the same, and Japan is not likely to sit still for too long and will soon start a second round of battles.

The meticulous planning that Kaneko showed 100 years ago is still very much in evidence and Japan has become more powerful since. Now is not the time to suddenly be sad or happy.