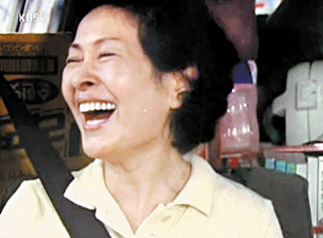 Han-ja (Kim Hye-ja) beams as she prepares to leave her home in “Mommy’s Angry.” [KBS-TV]

Mothers are running away from home - in well-received TV dramas, that is.

Trapped as stereotypical housewives who dedicate their lives 24 hours a day to their husbands and children, fleeing moms are a hot fad here.

The epicenter of this TV trend is “Mommy’s Angry,” written by Kim Su-hyun, the guru of Korean TV drama writing.

Han-ja, the lead character in this show, which airs at 8 p.m. on weekends on KBS2-TV, declared independence from the family after spending decades as a housewife looking after three children, a husband and a widowed father-in-law.

Han-ja’s situation doesn’t elicit sympathy at first. Her husband is trustworthy and father-in-law wise and caring. Her children have started families of their own.

However, Han-ja feels that something is missing in her life, which is her own self, and declares that she needs a break.

In a surprise announcement on her birthday, she decides to take a one-year break.

Meanwhile, another TV drama, “My Sweet Seoul,” which recently ended its run on SBS-TV, featured another runaway mom.

In this series, which is focused on the loves and anxieties of 30-somethings, the female lead first struggles with and then embraces her mother who decides to leave home.

In My Sweet Seoul, the mother is more like Nora from Ibsen’s “A Doll’s House” who slams the door in a revolutionary act to protest discrimination against women.

In a recent interview, the writer Kim said she wanted to “give a sabbatical year to all mothers.”

Some doubted whether Kim could attract a big enough audience, but she did, with record-breaking ratings, making the program a highly popular prime-time TV program.

The high audience rating, however, does not mean that all viewers welcome the runaway.

Viewers on the bulletin board of this TV drama are busy sharing their thoughts.

Some are raising their eyebrows at the main character, calling her “irresponsible” and “self-centered” for deserting her family. Some say on the Internet that they fear their mother-in-laws would do the same.

In recent episodes, Han-ja intentionally keeps her distance from her family, as she couldn’t be happier when she is alone in a room of her own.

She also could not care less about the complaints and whining of other family members, who have to deal with increased house chores and responsibilities.

She is doing her best to savor her independence by getting her nails done, going to late-night movie screenings by herself, reading and learning to use a computer.

Seeing Han-ja clearly so happy doing things that most in the younger generation take for granted, I found myself agreeing with the writer Kim’s intention to liberate mothers from their stereotypes.

I have to admit that I’ve not always been a big fan of this TV drama guru, as she has penned some overdramatic - yet still immensely popular - stories, such as a wife who finds out her husband is carrying on with her best friend, as in “The Woman of My Man,” a phenomenal hit last year.

However, Kim has long had a way with family dramas, and Mommy’s Angry playing with Korean family structures shows her magic is still alive and strong.

In addition, Kim also deftly presents characters who look and act authentic with those around them, such as the lovesick 80-something father-in-law and a 20-something daughter getting into trouble after marrying a man who is from a much higher social hierarchy.

By doing so, Kim cleverly addresses the issues of Korean families.

So I have a feeling that I’ll also be canceling appointments this weekend to surrender to Kim’s power after all.