Batman at its best in ‘The Dark Knight’

Batman at its best in ‘The Dark Knight’ 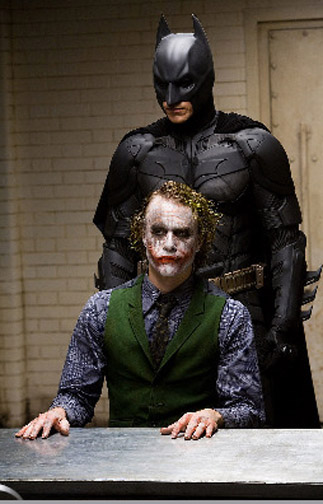 In this summer full of superhero movies, “The Dark Knight” could have easily been a victim of stolen thunder. But its predecessor, “Batman Begins,” was just so darn good. Then Katie Holmes, who had played a very flat Rachel Dawes, piqued interest by passing up the role to Maggie Gyllenhaal. And most unexpectedly, one of the film’s controversially cast stars, the late Heath Ledger, died just after filming wrapped.

The end result is that The Dark Knight was easily the most hyped movie of the year. Not surprisingly, the film meets expectations, with riveting action scenes, tense conflicts and as disturbing a villain as I’ve ever seen.

The scene sets on The Joker’s gang, clad in ghoulish rubber clown masks, in a bank robbery. As the heist progresses, the gang members, truly lacking honor, methodically pick off one another in order to get a greater share of the pot. After all, The Joker sure knows how to pick ’em.

These qualities are exactly what The Joker plots to expose among Gotham City’s residents through his increasingly violent crimes. His prime targets are two very different, yet public, figures: new district attorney and ultimate do-gooder Harvey Dent (Aaron Eckhart) and, of course, Batman (Christian Bale).

Made obvious by the film’s title, Batman is “the dark knight” in this dichotomy, while Dent is the white. But rather than being opponents, the two are largely allies. “The night is darkest just before the dawn,” Dent says in his pledge to lawfully clean up Gotham City. “And I promise you, the dawn is coming.”

Dent’s public quest for justice provides a ray of hope for Batman, who sees Dent as his possible replacement. Dent could be Batman’s out from vigilante heroism, leaving him to live happily ever after as Bruce Wayne with his childhood love Rachel, who is complicatedly on Dent’s arm.

Of course, The Dark Knight could never wrap up so tidily, and The Joker sees to it that both men’s plans are dashed.

The ensuing storylines comprise a film of epic proportions, which is a nice way of saying it’s very long. Ambitious director Christopher Nolan could have easily broken the film down into two to cover so much narrative ground, but his effort deserves applause.

Politics aside, The Dark Knight is Batman at its best, complete with spectacular flight - including Batman’s breathtakingly literal way of “catching a plane” - and star turns from each cast member, especially Ledger.

The Aussie pretty boy is utterly unrecognizable with a hideous, scarred mug, and his disturbing Joker proves an able foil to both Batman and Dent. Ledger’s untimely death meant he’d steal the show, but his performance would have done so on its own.