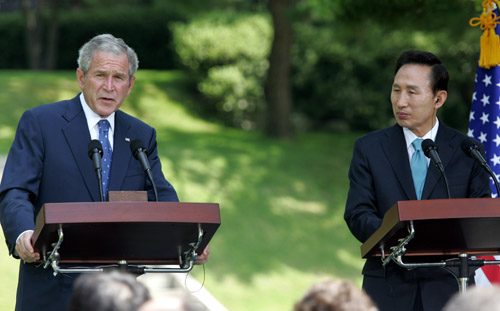 George W. Bush says Pyongyang has “a lot to do” before it leaves the “axis of evil” at a joint news conference after summit talks with Lee Myung-bak on Aug. 6 at the Blue House. By Kim Kyung-bin


Dark clouds are casting shadows over the work of denuclearizing North Korea. It was reported that Pyongyang, in its declaration of its nuclear program delivered on June 26, had demanded that the participants in the six-party talks recognize the North as a nuclear power. A four-page verification protocol was given to North Korea on July 10, but the North has not given any definitive response yet. The U.S. State Department, therefore, is said to be considering postponing the removal of North Korea from its list of state sponsors of terrorism, although the legally mandated 45 days since the Bush administration notified Congress of this plan falls on Aug. 11.

The proposed verification process includes such routine procedures as intrusive inspections of North Korean nuclear facilities, soil sampling, interviews with key scientists and participation of IAEA experts, according to Sung Kim, the newly named U.S. special envoy for the six-party talks. Christopher Hill, the chief U.S. negotiator, was optimistic about an accord on a detailed verification process. But Pyongyang has failed to meet his expectations thus far.

The killing of a South Korean tourist at the Mount Kumgang resort by a North Korean soldier last month has also created an unfavorable atmosphere. U.S. Congressman Thaddeus McCotter argued last week that the incident was proof that it was premature to remove North Korea from the list of state sponsors of terrorism. The incident and subsequent measures Pyongyang took against Seoul, such as the expulsion of “unnecessary” South Korean tourism personnel from the resort and the imposition of stricter rules on the movement of South Koreans there, put Seoul in a difficult position to make any friendly gesture toward North Korea in the near future.

Japan, which has been demanding repatriation of Japanese abductees first, will certainly not agree to a verification process that does not include the stockpile of plutonium and nuclear devices in Pyongyang’s hands. Now that the Beijing Olympics is underway, China will have time to consider what side effects a nuclear-armed North Korea will have on the security of Northeast Asia.

The optimism shared by participants in the six-party talks in June and early July when Pyongyang submitted the declaration, blew up a cooling tower and participated in the long-awaited talks has evaporated in less than two months. Moreover, there are only a few months left in President Bush’s term. But Secretary of State Condoleezza Rice, who once expressed optimism that the disablement of North Korea’s nuclear program would be completed within Bush’s term, is left with no alternative but to urge Pyongyang to accept the proposed terms for verification of its nuclear activities.

As we recall, Rice was full of pride in her work when she reproached Jay Lefkowitz, Bush’s special envoy on North Korean human rights, in January. She said that Lefkowitz was not speaking for the administration when he predicted that Pyongyang would hold on to its nuclear weapons. “He’s the human rights envoy,” she said, “That’s what he knows. That’s what he does ... He doesn’t know what’s going on in the six-party talks and he certainly has no say in the six-party talks.”

It is said that you cover what is known in diplomacy, while you uncover the unknown in archaeology. It is not reasonable to assume that the participants in the six-party talks, especially the United States, which has made frequent contacts with the North separately, did not realize that North Korea intended to be recognized as a nuclear power. If the U.S. negotiators, “who know what’s going on in the six-party talks,” were reluctant to disclose the North’s intention, there must have been a reason. Many people have suspected that the policy goal the U.S. negotiators pursued in the past one and half years was to turn the North’s nuclear clock back to 2002, rather than to completely settle its nuclear problem.

Of course, we should recognize the accomplishments of the six-party talks thus far. Pyongyang turned over18,000 pages of documents related to its plutonium program; blew up the cooling tower of its reactor; closed plutonium related reprocessing facilities at Yongbyon; and submitted a 60-page declaration of its nuclear activities. As far as the plutonium-related program is concerned, it can be said that the goal of turning back the clock of the North Korean nuclear program to 2002 was accomplished by the closure and partial disablement of plutonium-related facilities in Yongbyon.

The suspicion that North Korea pursued a secret uranium enrichment program and shared nuclear technology with other countries has not been cleared yet. They are not questions that can be resolved in a relatively short time. Moreover, there is no evidence that they pose a clear and present danger to world peace or regional security. It is the 60 kilograms or so of plutonium, or 7 to 8 bombs in North Korea’s hands, that pose a greater threat to world peace, and destabilize the balance of power in Northeast Asia. It is desirable for the outgoing Bush administration to concentrate - before removing North Korea from its list of state sponsors of terrorism - its efforts on enforcing a stringent verification process, and to pay special attention to the stockpiles of plutonium and nuclear devices in North Korea.

*The writer, a former editorial page editor of the JoongAng Daily, is a visiting professor of media studies at Myongji University.