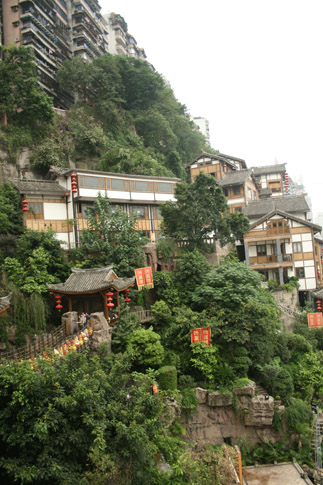 The Hongya Cultural Cave Center in Yuzhong District, an area built in the style of old mountainside homes.

During my visit last month, the city’s sky was full of dust from construction and other airborne pollutants.

Every other street was unpaved and bridges, railways and expressways were in a state of disrepair or undergoing repairs.

Chongqing’s weather is unbearably humid at this time of year and most men were shirtless.

Chongqing is an economic hub in what appears to be central China when you see it on a map but it is usually regarded as a city in southwest China. 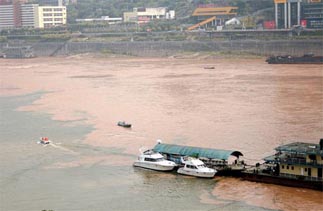 The city has many skyscrapers that soar into the sky. It is currently building China’s tallest skyscraper called the Chongqing Tower. It has more than 100 floors and construction finishes next year.

The city has a long and symbolic history, too. In 1981, Chongqing became the country’s first inland port to open to foreign trade. Agricultural goods were transported east, as they still are. Materials such as iron, copper and motors for vehicles in China are produced here.

There are many cargo vessels at the Chaotianmen Dock in Yuzhong District, the best place to start the city journey.

You can catch an overview here of Chongqing, including the intersection of the Yangtze River, the longest river in Asia, and the Jialing River.

A popular cruise starting here is a sightseeing trip to the Three Gorges along the Yangtze. 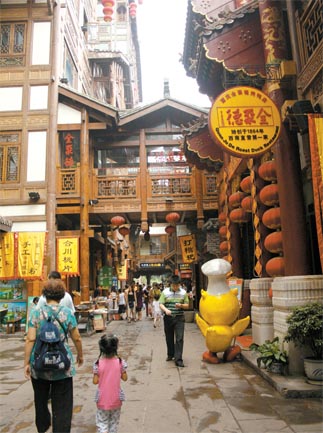 The narrow alley inside the Hongya Cultural Center.

The two flowing rivers are distinct in color. The Yangtze is brown and muddy while the Jialing is blue and clear.

Looking down from the dock reminded me of an unbalanced mixture of oil and water.

Truth be told, the city seemed sad and gloomy. During my short stay, the city appeared to weep, as if every chunk of piled-up cement had left a scar on the city’s soul.

But any city has to go through a period of instability and redevelopment if it is to grow. I know that because I come from Seoul. 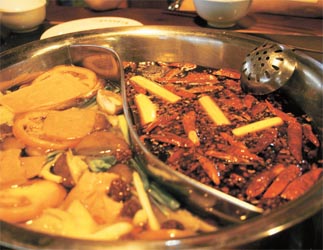 It is common for people living in a megatropolis to witness a rapid change in their environment.

People say you need the sour of life to taste the sweet. Well, Chong-qing is experiencing the bitter taste of modernization. The sweet is yet to come.

The city has suffered a great deal in the past. From 1938 to 1940, Japan bombed the area because Chongqing was the country’s capital from 1937 until the national government returned to Nanjing in 1946. The government relocated to Chongqing to escape the invading forces. They thought it would be safer, though it, too, was bombed.

Not far from the Chaotianmen Dock is the 27.5-meter (30-yard) Jie Fang Bei, the People’s Liberation Monument built in 1940 to celebrate the country’s liberation from Japan. At first glance, it reminded me of the Monument to the Great Fire of London in England, only shorter. 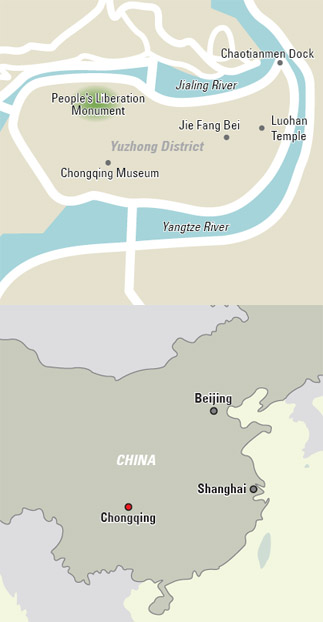 The monument is in downtown Jie Fang Bei, Chongqing’s business and financial center where state-run department stores like the Meimei and Pacific Department Stores and hotels are located. I was surprised to see so many local people shopping inside the luxurious department store. Most stores were for designers like DKNY, Dolce and Gabbana and Chanel. The prices weren’t cheap - the same or higher than in Korea.

I was at the shopping square on a Monday and the area was packed with well-dressed people. Every corner of the municipal city was crowded. It looked as if every day was a holiday here.

“Chongqing people are very optimistic and festive,” said Sun Ming Shu, whom I met at the shopping square.

Looking around, senior citizens were dancing without music.

“Everyday is a festival at the Chaotianmen Dock,” Sun added.

“The night view doesn’t lag behind a European site like the Eiffel Tower in Paris,” Sun said proudly.

She seemed happy about the city’s current state of reconstruction. But at this rate, the city might lose all its traditions.

The only preserved area is Ciqikou in Shapingba District. It’s a hilly area with narrow streets. It’s like Insa-dong in Seoul with many antique and traditional handmade goods sold here.

But the area is too commercialized. There are hardly any local residences but many souvenir shops and fusion restaurants. I didn’t like it because the streets seemed to have lost their spirit.

Other historic sites were either destroyed in World War II or sacrificed through industrialization.

The municipal city is aware of losing its treasures - like the beautiful traditional architecture seen along the undulating landscape. Houses were built among the hills but now, taller buildings are popping up. Like the outskirts of Seoul, mountains are everywhere in Chongqing. It’s like a city inside a jungle.

Don’t expect too much. It looks charming from the outside with red lanterns and wooden architecture, resembling houses from the Song Dynasty. But inside there isn’t much to see. There are snack stalls, restaurants, souvenir shops and a theater along the narrow streets. Imagine COEX mall in southern Seoul on a smaller scale in a rougher neighborhood.

The architecture at Hongya Cultural Cave Center makes for some interesting viewing. The traditional houses are built on the city’s mountainous and cliff-sided landscape.

My new friend Sun told me that the city is like what Shanghai was 10 years back.

I left Chongqing hoping that it wouldn’t become overly modernized in the future. But my hope might be seen as a curse to entrepreneurs here planning to open businesses.

The Chongqing people might later regret the hasty development.

Maybe some already do.