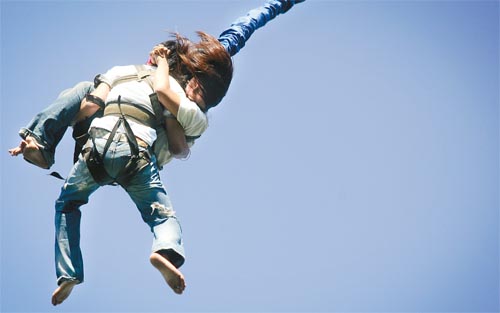 Park Jun-sang and Lee Seul do a couple bungee jump. By Lee Chan-weon

Bungee jumping has been in the news this week for tragic reasons following the death of a 36-year-old man in Naju, South Jeolla, on Tuesday.

While the sport has to be approached with caution, deaths and other injuries are considered rare and bungee jumping has been a popular extreme sport for more than 15 years around the world.

One of the most scenic spots for bungee jumping is Riverland, a sports facility in Gapyeong County, Gyeonggi. It boasts a 50-meter-high bungee jump tower and facilities for other water sports.

It’s a picturesque spot on the banks of the Bukhan River surrounded by mountains that unfold like a screen.

While 50 meters is high, there are higher ones. The tower at Inje, Gangwon, is the highest in Korea at 63 meters, but most towers measure around 40 to 55 meters.

“The height of the tower or bungee jump structure does not really have an effect on the fun factor of the jump,” said Park Chang-yong, the general manager of Riverland.

“The actual jump lasts no more than a few seconds and the adrenaline rush that results is all the same regardless of the slight difference in the height of the tower,” he said.

There are also different types of jumps, according to the way the jumpers are harnessed to the bungee cord.

The first method, and the most recommended for novice jumpers, is chest and waist harness with the cord attached to either the back or chest area, depending on which direction the jumper wants to leap off the platform.

“Most experienced jumpers take the ankle method, but some attach the cord to the wrists with their arms spread apart in ‘Y’ shape,” said Park.

Although the wrist jumps are seldom done, Riverland organizes a jump no other place in Korea offers on a regular basis: couple jumps. 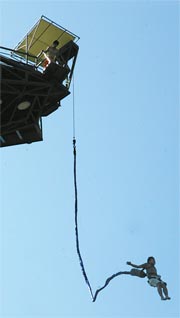 “Other places offer this type of jump on a promotional basis, but we offer two types of couple jumps,” Park explained.

Park Jun-sang, a 23-year-old student who couple jumped with his girlfriend, was ecstatic after his jump.

“I thought it was more thrilling than jumping on my own,” he said.

But his girlfriend looked like she was in a state of shock.

“It was absolutely terrifying and I don’t think I could’ve done it on my own. There’s no way I could’ve made the jump without my boyfriend,” said Lee Seul, a 22-year-old student. 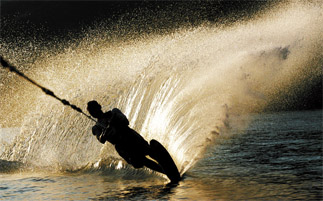 Some people may question why people make such jumps, but to Park Chang-yong, it’s simple: the extreme nature of the experience.

“It’s the feeling that I accomplished something that’s adventurous and scary. It gives most people who complete the jump a sense of self-esteem and self-complacency,” explained Park.

For others, it can be a way to deal with bottled up emotions.

“A few years ago a middle-aged woman woke me at the crack of dawn. She wanted to bungee jump. The women said she was severely depressed and was contemplating suicide. What else could I do? I took her up the bungee jump tower. I don’t know if the jump cured her blues but she cried and thanked me on her way out,” said Park.

The overwhelming majority of jumpers at Riverland were young thrill seekers looking for something more exciting than the average amusement park ride.

“It was an unusual experience for sure. It’s refreshing and exhilarating to say the least. I would definitely do it again,” said Park Byeong-gyu, a 24-year-old pizza chef.

One of the few middle-aged jumpers of the day gave his jump an overwhelming thumbs up.

“It was great! I can’t really put into words the horrifying feeling during the jump and then the refreshing rush at the end. My ankles hurt a little but that’s alright,” said Choi Jin-young, a 41-year-old entrepreneur.

Asked if he jumps on a regular basis, Park said he tried the jump once but has not been bold enough to try it since.

“It depends on the jumper but the adrenaline rush was almost too much for me,” Choi said.

If you cannot work up the courage to plunge off a 50 meter high tower, Riverland also offers a range of water leisure activities.

Which is the best for a novice?

“It’s never easy for a first-timer to get a grasp of waterskiing and wakeboarding,” said Choi Chul-hee, in charge of the water sports.

“People’s bodies are trained to react a certain way on the ground and this can get in the way of moving on water,” explained Choi.

Still, no one is under any illusions. These are sports that have to be approached with due care.

How safe is bungee jumping?

The police say the owner of the bungee jump operation was responsible for two previous accidents in 2003 and 2005. Police also stated they are handling the case as negligence on Shin’s behalf and have booked him and are now in the process of investigating him for negligent manslaughter.

The cord has been submitted to the National Institute of Scientific Investigation for testing.

According to Choi Cheol-hee, a manager at Riverland, accidents resulting from bungee jumps should never lead to deaths.

“There have been bungee jump accidents before in Bundang and near Nami Island in the past; however, since the towers are located next to a lake or a river, the jumper fell in water,” Choi explained.

“Most accidents happen after the first bounce as the jumper is pulled back toward the tower. The snap of the bungee cord usually occurs at five to seven meters above ground or water surface.

“The depth of water at the base of our tower is 7.5 meters deep, meaning even if the cord snapped, the jumper can safely land in water,” said Park Chang-yong, the general manager of Riverland, the water sports facility in Gyeonggi.

Park said stressed the importance of checking all the safety features before the jump, such as the floating devices attached to the end of the bungee cord. If the cord snaps, the jumper will fall into the water and can use the floating device for safety.

Another issue is to make sure qualified lifeguards are nearby.

“The water surface where jumpers can land is reachable by our staff in less than a minute. And the fact that we always have two qualified lifeguards on duty enables us to deal with even the most serious cases if the jumpers need basic medical attention or resuscitation,” Park added.