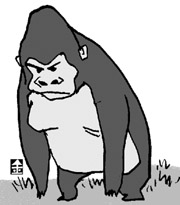 Last June, the Spanish parliament passed a resolution calling for the government to grant certain human rights to “our nonhuman brothers” - apes, gorillas, chimpanzees and orangutans. The resolution urged parliament to acknowledge unequivocally the rights of anthropoid apes, which are most genetically similar to humans.

There are two species of gorilla: The western gorilla and the eastern gorilla. The dark-colored eastern gorilla is found in the Democratic Republic of Congo in central Africa. About 380 mountain gorillas live in the Virunga National Park, one of Africa’s oldest national parks. It represents almost half of the total population of the mountain gorillas in the world, which is estimated to be around 700. The rest live on the borders of Rwanda and Uganda.

Gorillas in the Virunga National Park suffer from continued instability in the surrounding human societies, and have faced a grave internal war over the past decade. A genocide of more than half a million people was carried out by Hutu extremists against Tutsi and moderate Hutus in Rwanda in 1994. While the civil war raged between the Hutu tribe and the government army, gorillas also died in great numbers. The rebels kill the mountain gorillas whenever they feel hungry, and threaten to annihilate the whole population of gorillas if the government carries out a military offensive to root out insurgents.

Another major culprit in this sordid affair is coltan, a dull black mineral that is refined into a powder called tantalum, and then used to make cell phones, laptops and jet engines. With unprecedented demand, it is worth hundreds of thousands of Korean won per kilogram. The rebels sell coltan on the black market to finance their wars.

The International Union for Conservation of Nature said that almost 50 percent of the world’s 634 primates are in danger of becoming extinct.

It is a reality that unless we put the brakes on humans’ nature-destructive behavior, we may see the extinction of many of our nearest evolutionary relatives.