Lee sticks to right-wing agenda despite the polls

Lee sticks to right-wing agenda despite the polls 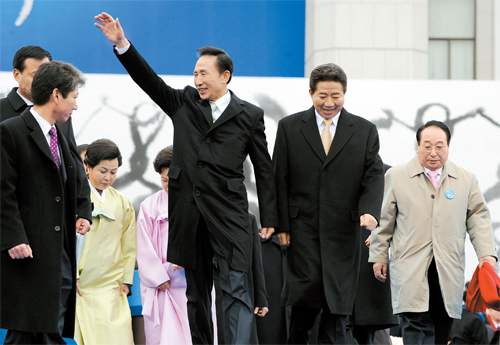 President Lee Myung-bak waves after his inauguration ceremony in February.

When they handed President Lee Myung-bak the keys to the Blue House, Koreans expected a quick turnaround in the sluggish economy.

Nothing else mattered as much. 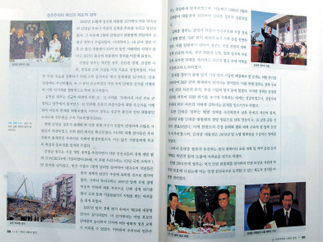 The president’s advertised shift to the right, a break from a decade of liberal policies, was expected. A tough stance towards Pyongyang was accepted albeit with some concern.

That was six months ago when President Lee’s political capital seemed abundant. He commanded an 80 percent approval rate at the start of his term. 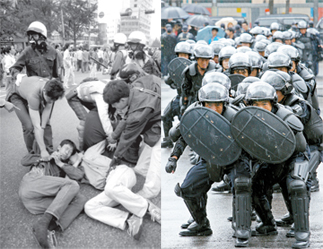 Months-long protests over the import of U.S. beef have become a rallying call for the anti-Lee Myung-bak camp, hampering the implementation of any new policies. Blunders on the diplomatic front have only added to the agony, but the besieged government has chosen to stay true to its conservative colors.

Changes have come in various forms as the administration has taken upon itself the task of implementing measures that it deems necessary for creating a society where conservative values prevail.

Just last week, a special police unit was set up to deal exclusively with violent protesters. Civic groups made comparisons with the notorious Baekgoldan, or “White Skull Corps,” created during the authoritarian regime of former President Chun Doo Hwan in the 1980s. At the height of student protests, this particular unit was feared for its relentless pursuit of demonstrators. Their white helmets and blue jackets became a symbol of oppression against democracy.

The government argues that the new unit is necessary. By 2014, men eligible for mandatory military service will no longer be recruited into the ranks of the riot police units. The military wants to reduce the options of alternative military service.

The unit is currently a 1,700-strong force, but it’s expected to grow to 14,000, eventually replacing the current riot police units altogether.

Nevertheless, experts say the purpose of the paramilitary-style unit is geared toward capturing demonstrators instead of containing or dispersing crowds, which is the traditional role of the current riot police units.

Police officials have not denied that this is the case.

“From now on, illegal demonstrations will be dealt with through operations focusing on catching protesters rather than breaking up rallies,” said Kim Seok-gi, the head of the Seoul Metropolitan Police Agency.

At the end of June, the government announced that a no-tear-gas policy dating back to 1998 would no longer be honored if circumstances made its use necessary.

Tear gas was used in prodigious quantities during violent street battles between protesters and riot police in the ’80s.

Meanwhile, the military announced last week that it would weed out “seditious literature” from the rank and file for the sake of keeping what it believes is a sound spirit within military ranks.

The guidelines that the military has provided to all armed branches of the military identify 23 books considered either pro-North Korea, anti-government, anti-United States or against the market economy.

The list included Noam Chomsky’s “Year 501: The Conquest Continues,” which the military dubbed as anti-government while also harboring anti-U.S. thoughts. Other books on the list included “Bad Samaritans,” by Chang Ha-joon, an economics professor at the University of Cambridge.

“Considering that a conservative party’s candidate has become president, these measures are no surprise. Establishing law and order is a very important mandate for the Lee administration,” said Kim Eui-young, a professor of political affairs at Kyung Hee University. “It’s a classical conservative approach in which growth is achieved first by establishing internal stability.”

In a country where memories of student movements are still vivid, people watch these measures taken by the military with weary eyes. “It’s just absurd. To think that one can dictate the intellectual choice of others today. It’s a comedy,” said Park Hye-yong, an official with the Association of Writers for National Literature. “This is practical murder of the authors and a declaration of war against the readers who already have read those books.”

The Defense Ministry defended its move, saying the security of the Korean Peninsula has to be taken into account. “It’s standard procedure to forbid reading material considered to be threatening to the healthy spirit of the soldiers,” said an officer of the Defense Ministry.

Usually, the Defense Security Command is in charge of affairs pertaining to the country’s National Security Law, which encompasses a range of issues including a ban on certain books.

While the military regularly updates its list of publications it does not want soldiers to read, the most recent move came amid concerns that an organization in the South officially stamped by the government as pro-North Korea has tried to send free books to the military with an aim to groom dissent.

“Our analysis suggests that the gesture [to donate the books] was not done out of pure goodwill but the intention was to spread some bad ideas,” said another officer speaking on condition of anonymity. The officer declined to identify the organization in question.

Ironically, sales of the books on the government’s blacklist surged after the measures became public.

According to Aladdin, an online bookstore, Bad Samaritans previously sold only a few copies a day at best but it’s now selling hundreds of copies a day since the ban took place. Close to 500 copies were sold last Friday alone. Yes 24, another online bookstore, said sales of these particular books have also risen. Both shops have launched ad campaigns for the banned books.

Under the liberal leadership of former President Roh Moo-hyun, even the military, one of the most conservative pillars of the country, was subject to changes that reflected the philosophy of the last government.

At the end of Roh’s term, the military said it would allow conscientious objectors to fulfill their obligation for mandatory military duty through alternative service, altering a policy that had stood since the Korean War (1950-1953).

While liberal civic groups were no doubt pleased to have finally embedded one of the nation’s most conservative organizations with fresh ideas, the move was resented by the traditional officer corps.

Earlier, the Defense Ministry of the new administration said it would need to reconsider whether to grant conscientious objectors an alternative form of military service or send them to jail, like before.

On the educational front, the Education Ministry has concluded that more emphasis should be placed on anbogyoyuk, which focuses on educating students about the country’s national security, with particular emphasis on North Korea.

In addition, Education Minister Kim Do-yeon, who was replaced this week, has hinted that the government is looking to make changes in the future to current history textbooks judged to be nursing anti-U.S. and anti-market economy sentiment.

When Kong Jung-tack, the current superintendent of the Seoul Metropolitan Office of Education, beat out his left-leaning rival Jou Kyong-bok last week in the first direct election for the position, Kong provided President Lee Myung-bak and the Grand National Party a much-needed political victory.

“Education can’t be left in the hands of the Korean Teachers and Education Workers’ Union,” the slogan said.

The union has become an influential force in the educational system here. Members have tried to infuse students with more liberal thoughts on various social issues.

Today, the union has grown to a nationwide organization that claims a membership of 100,000. Its recent involvement in social affairs emerged when the union said it would write to parents to encourage their participation in the anti-U.S. beef protests.

Kong’s election, then, is a clear opportunity for the current administration to go on the offensive. Yesterday, the Education Ministry said it had ordered schools to educate students on the benefits of importing of U.S. beef. Meanwhile, the Unification Ministry has denied the union its request to meets its counterparts in North Korea.

Internet technology is another area of uncertainty with the news administration. While former president Roh Moo-hyun used the Internet to mobilize supporters in the presidential election and gave his support to Oh-myNews!, an Internet-based daily news site, the current administration and ruling party seem unimpressed by the wonders of technology.

In fact, a hint of disdain is easy to detect. Grand National Party lawmakers recently submitted a bill to the National Assembly that would give the Korea Communications Commission the power to shut down Internet sites judged to contain illegal or slanderous material.

Connecting the dots on this particular move isn’t that hard. When protests of the import of U.S. beef were at their height, President Lee publicly warned about the downside of the Internet, spurred by the belief within the administration that the government was victimized by an Internet rumor mill.

Some experts said President Lee had fallen into the trap of trying too hard to go in the opposite direction of his predecessor. “It’s all about an anything-but-Roh approach to virtually all matters that is causing mistakes,” said Lee Nae-young, a professor at Korea University.

“It’s something embedded so deeply and it’s not only the president but the inner circle as well. Selective denial would be much more rational and yield better results,” Kim said.

But President Lee’s move to the right has encountered a degree of bad timing. While experts predicted a downturn in inter-Korean relations, the unexpected shooting of a South Korean tourist at the Mount Kumgang resort has only accelerated the anticipated deterioration of bilateral ties.

Unlike at the last Olympics in Athens in 2004, the two Koreas didn’t march at the opening ceremony of this year’s Games in Beijing beneath a joint flag. A joint entrance had been taken for granted before this year’s political tensions.

Meanwhile, Seoul’s demands for a joint investigation into the shooting death have fallen on deaf ears and the lack of a reliable channel to work out a compromise has put both Koreas in a stalemate, threatening to set back inter-Korean relations to pre-Sunshine Policy days.

Support for Lee has fallen very quickly. Public opinion polls conducted at the end of last month had President Lee’s approval rating below 20 percent. Considering he apologized in public twice already for failing to communicate, the latest numbers indicate that the president still has not found an efficient way to talk to the people of Korea and build support.

Government actions in the past month.

*Grand National Party lawmakers propose amendments for approval to empower the Korea Communications Commission to shut down Internet sites if they are judged to contain illegal or slanderous material.