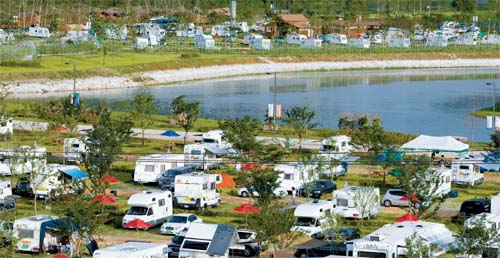 Jara Island in Gapyeong, Gyeonggi, was more than crowded earlier this summer - not with people but with campers. 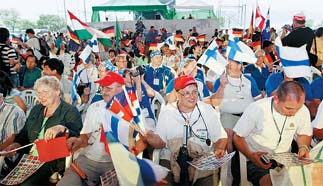 The opening ceremony of the 74th International Camping and Caravaning Rally on Jara Island, Gapyeong, Gyeonggi.

The 74th International Camping and Caravanning Rally took place on the island from July 30 to Aug. 4.

The island’s grass field was decorated with tents, campers, trailers and 1,800 participants from 25 countries. 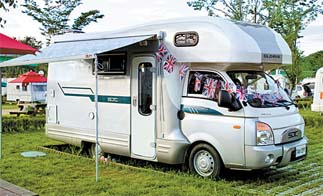 Some 2.5 million members from 32 countries are registered in the camping federation, which the Korea Camping and Caravanning Federation joined in 1994.

The camping site in Jara Island will be open to the public next month.

It isn’t the first time for Korea to host an international camping event.

In 2002, Korea hosted the FICC Donghae Rally in 2002. Over 1,500 campers from 22 countries visited the east coast in Gangwon Province.

The local economic impact of the rally was worth 3 billion won to Donghae City.

At Jara Island’s parking lot was Lee Gwang-won, one of the 28 Korean participants, who shared his first camping experience.

“Ten years ago, my family and I went on a trip to Yeoncheon, Gyeonggi,” he said. “And we had a lot of trouble. A tree near our base camp fell due to heavy rain.”

After the frightening incident, Lee bought a camping car. He thought it would be safer and more comfortable.

“Before I bought a camping car, camping was a burden,” Lee said, proudly pointing to his Fleetwood folding trailer. He ordered the 1.5-million won trailer last April and it arrived a month before the rally.

“A folding trailer adapts to the Korean environment where streets are narrow and there’s a lack of parking spaces,” he said.

There are two types of campers - trailers and motor caravans.

Trailers are attached to a separate vehicle while motor caravans are part of the vehicle.

Each has its pros and cons.

Trailers are difficult to drive, especially when parking or backing up. And if the trailer is of a certain weight, you need a special driving license. However, if you camp at a place for long, you can detach the trailer from the vehicle and drive around easily.

Traveling long distances with motor caravans is more difficult since the vehicle itself is quite cumbersome.

In fact, the Gapyeong organizing committee rented and then loaned out 110 camping cars produced by local camping car companies for this year’s rally.

“You can travel in rain or snow with a camping car,” said Bauman Balter, a 62-year-old Swiss participant who borrowed a caravan from the committee for the event.

Right on cue, the moment he uttered those words, the sky became dark and rain started to fall. Balter quickly went inside the caravan and declared, “This is why I like camping cars.”

Ko Jae-mo, who brought his own camping car, agrees.

“A trailer is a mini condominium,” Ko said. His 30-million won trailer, manufactured by the U.S. company Columbia Northwest Inc., is rectangular in shape when on the road but transforms into a triangular shape when at the camp site.

Like golf, which was once considered a luxury sport here, camping too is becoming more popular with the masses.

Currently, the camping car industry is estimated at $14 billion worldwide, according to the American Recreation Vehicle Industry Association. And the number is climbing, as baby boomers take to camping cars after they retire.

“Camping cars are a symbol of a developed camping culture,” said Moon Hye-shik, the deputy chief of Korea Camping Federation.

The only downside, says Bang Jin-bae of local manufacturer Sejung Camping Car, is that “Nearly 90 percent of campers in Korea are imported.”