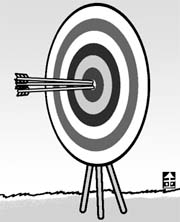 Many viewers were surprised to see a familiar locally produced brand name Samick in the archery competitions at the Beijing Olympic Games. It is a general trend now that foreign teams also use Samick-made bows.

The secret of Samick products is in their bow wings. The mixing of epoxy resin with high-tech carbon fibers guarantees the same elasticity, even after a bow is strung more than 100,000 times. Customized production is also one of the secrets behind the success of Samick. Twelve staff members custom-produce each bow by hand to suit the characteristics of different players.

As Korean archery teams have maintained their supremacy in the archery world, more than half of the world’s best archers use Samick-produced bows.

During international paragliding competitions, the sky is embroidered with Korean images such as traditional hahoe masks. Jin Gliders, consisting of 30 staff, produce a wing made of seven thin sheets of fabric overlapping one over the another, stitched in such a way as to reduce wind resistance and maximize the wind’s power.

The company boasts several world records, having swept the international paragliding competitions for six consecutive years, with the No. 1 ranking and a global market share of 30 percent.

Shaquille O’Neal once complained about the official National Basketball Association-endorsed Spalding basketball in the United States, saying, “It gets slippery when our hands get wet.” Korea’s Star Sports on the other hand, showed its technological excellence with a basketball produced by winding thread tens of thousands of times inside the ball, and attaching to the ball’s exterior.

The recent switchover of the official basketball in the NBA from leather to synthetic rubber seemed to be due to pressure from animal protection groups.

Despite the ball’s superiority, however, professional players and fans in the U.S. never reveal their admiration for basketballs produced by Star Sports.

Last January, Korea’s bobsled team borrowed a bobsled and won a bronze medal in the bobsledding competition in the U.S., which made us feel proud but sad.

Barriers in the sports products market are high. It is mandatory to have a professional attitude and be fully equipped with state-of-the-art technology.

We are profoundly pleased to see the Korean-made bow on TV.

The size of the world sports-leisure products market is more than 200 trillion won [$194 billion], and it is nice to see us beginning to get our piece.