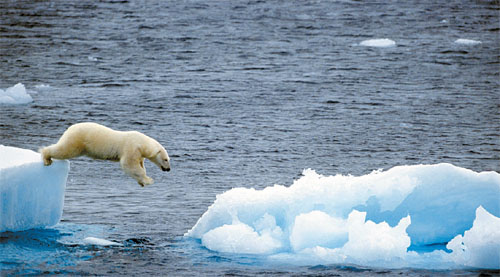 A scene from documentary film “Earth,” which opens early next month. Provided by All That Cinema

Korean moviegoers will soon hear wild animals, from polar bears in the Arctic to elephants in the African Kalahari Desert, stomping into local theaters.

“Earth,” a documentary film directed by Alastair Fothergill and Mark Linfield, opens Sept. 4 with hopes of stirring an ecological movement to save the Earth from global warming.

The documentary is based on the British Broadcasting Company’s television series “Planet Earth” (2006) and follows the migration paths of struggling animal families.

Earth was originally narrated by English actor Patrick Stewart, who played the leading role of Captain Jean-Luc Picard in the Star Trek series. 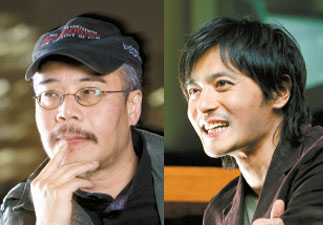 For the documentary’s Korean version, film and television actor Jang Dong-gun takes on the narration under director Lee Myung-se’s supervision.

“Since animals have no lines, it is the narrator’s role to deliver the film’s epic story, humor, emotion, thrills and suspense,” Lee said, noting that the film is the animal version of Steven Soderbergh’s “Ocean’s Eleven” (2001).

When he first previewed the documentary, Lee was more than eager to work on a Korean narration.

He thought the message could be delivered more clearly to local audiences in Korean than via English or subtitles.

The adventures that the animals encounter as they escape from the changing climate carves a special message deep into people’s hearts.

“We have our feet set on Earth but we take that for granted,” Jang said. “We often forget to thank nature.”

And now, Earth is under a huge ecological threat. The film shows how grand nature still is - rainbows, large waterfalls, the Himalayan mountains and clouds.

Filming of the documentary took place in 26 different countries and took five years to film. Some 40 camera operators moved from the North to the South Pole to capture animal life.

Lee’s favorite scene is the flock of cranes crossing the Himalaya Mountains for survival.

“Though crossing the mountains is death-threatening, the cranes challenged nature’s barrier,” Jang said.

Since the film doesn’t depend on digital technology but natural scenes, Jang couldn’t take his eyes off the screen when he first previewed the documentary.

“Most animals in the film are very impressive - like the African elephants who leave their homes in search for water.”

Working on the narration, however, was difficult.

“The previous narrator, Patrick Stewart, has more experience than I do,” Jang said. “I wasn’t sure at first if I could narrate as well.”

Jang wanted to sound familiar to the audience, yet objective.

Interestingly, this was Jang’s first job in Korean for some time.

But after so much effort, he proudly presents the film to Korean audiences.

“The documentary isn’t artificial - it follows the law of nature,” he said.