[TV review]Park’s pride of the pool, on all TV channels

[TV review]Park’s pride of the pool, on all TV channels 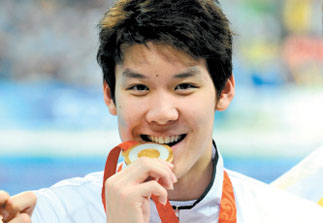 Park’s pride of the pool, on all TV channels
It’s 3 a.m. on Tuesday, and I just threw in the towel.

My days-long hunt for a target that has nothing to do with Olympics did not lead to any fruition.

Every mainstream, public channel just finished their Beijing Olympic specials or reruns of the highlights of the Games. There seems to be no escape. My original idea was to make an Olympic diary that was not related to the Games.

I wanted to emulate Japanese writer Haruki Murakami’s essay on the 1984 Los Angeles Olympics that deliberately discussed non-Games matters, such as the joy of having seaweed salad in summer.

Still, clicks on my remote control only brought me to constant reruns of super cute 19-year-old swimmer Park Tae-hwan and other winners from this country, like those for archery and judo.

Korea’s major TV networks, MBC, KBS and SBS, are having a field day. Many of the shows in other genres, including immensely popular entertainment shows, were canceled or delayed.

Even commercials were dedicated to the Olympics theme, making it next to impossible to avoid the sports.

But the Games are one way to forget the sultry weather and the hassles of the real world.

I can’t deny that watching Park beaming on the podium clutching his gold is better than watching blundering politicians sling mud at each other.

And watching the archers hit bull’s-eye for gold distracts people from everyday worries like surging prices and losses on the stock market.

Each TV network is trying to attract viewers to its channel. One approach is to hire former athletes or former coaches as commentators. Yet some of the broadcasters were far too over-the-top.

They did nothing but cry out at the top of their lungs when Park was swimming on Sunday morning.

The behavior of one commentator on SBS is a good example. He was on the verge of tears when Park finished first in the 400-meter freestyle.

A former coach of Park, he just let out a series of exclamations like “Wow,” “Oh no,” “Oh yes” and “Ugh” during the race.

Some critics from the non-broadcasting sector complained in their reviews that the commentator was too histrionic.

Meanwhile, another sportscaster said President Bush was waving a Taegeukgi, Korea’s national flag, instead of the Stars and the Stripes.

But these are cute mistakes compared to MBC’s subtitles for the opening ceremony. When the athletes entered the main stadium, MBC gave a brief introduction of each country.

According to MBC, Ghana is where “Jesus Christ performed his first miracle.” The channel was confused perhaps with Cana in Israel.

The terms used did not seem very diplomatic, either.

The United Arab Emirates was described as “a place where the money is” and “a funnel of wealth.”

The Virgin Islands, meanwhile, was introduced as the “place where the founder of Google recently got married.”

I would not be very pleased if that is all that can be said about my country.

Meanwhile, MBC ran a subtitle that read, “Bu Chang Bu Su,” a saying in Chinese characters that means “a wife following the lead of her husband,” after the Korean men’s archery team earned gold on Monday, following the gold of the women’s team on Sunday.

Despite these mistakes, the Games are fun. There are more than 10 days left and the wisest option is to flick on the air conditioning, sit back and let the Games besiege you.

You can’t evade them even if you want to.