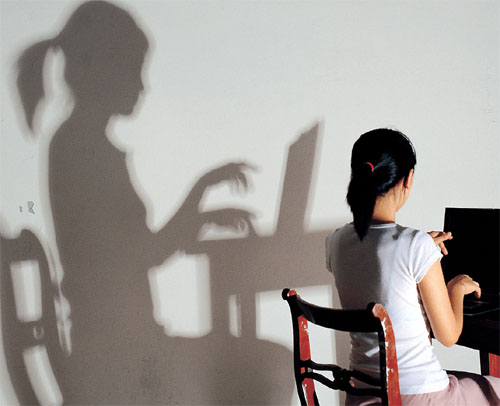 New government regulations are aimed at cracking down on harmful messages on the Internet, but critics say the new measures infringe Web users’ rights. [JoongAng Ilbo]


A sea of information or a storm of disinformation?

Prompted by the role cyberspace can play in influencing public opinion, for good or ill, President Lee Myung-bak’s administration announced a series of new measures in July aimed at reducing illegal or slanderous online material.

The new measures expand on the identity verification system, which was launched in July last year.

The identity verification system obliges portal sites to check the identities of all blog and discussion board users who post comments using their residence registration numbers or alternatives.

Prior to last July, users wishing to make comments online did not need to register with their real names and residence registration numbers.

The identity verification system currently applies to news sites with more than 200,000 visitors a day, or portal sites and user-created content sites with over 300,000 users a day.

At a public hearing last Friday on the identity verification system, participants debated whether or not the government should expand the system to more Web sites. [JoongAng Ilbo]

But the government now plans to expand the system to Korean-domain Web sites carrying more than 100,000 visitors a day.

“We found that the adoption of the identity check system has reduced both the number and the level of libelous postings,” said Na Hyeon-jun of the Korea Communications Commission at a public hearing last Friday afternoon. The aim of the hearing was to assess the effectiveness of the new system.

“Contrary to concerns, the system has not decreased the number of users at the sites,” said Na, who works in the commission’s network policy bureau.

The percentage of slanderous messages has decreased from 15.8 percent to 13.9 percent after the implementation of the system, according to a survey conducted by the commission and the National Internet Development Agency of Korea from June to August last year.

The survey claims that the portion of libelous postings they categorize to be “of high degree” has decreased from 8.9 percent to 6.7 percent.

“The system helps curb insults, libel and inaccurate information that is rampant on the Internet due to anonymity. It also makes it easier to settle disputes as [the system] allows us to trace offenders,” said Hwang Chang-geun, a law professor at Hongik University. 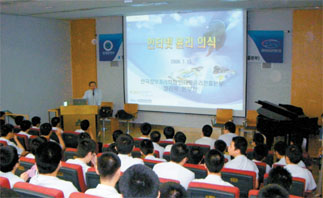 Na and other supporters of the identity verification system are now calling for applying the system to more Web sites. But neither the data nor their subsequent arguments have succeeded in persuading the system’s opponents.

“The survey is not enough to validate the [identity verification] system,” said Seong Dong-jin of the Korea Internet Corporation Association. “It was conducted right after the adoption of the system and fails to encompass long-term effects.”

The association consists of more than 170 Internet-related companies such as the operators of portal, e-commerce and game sites.

“We also believe it’s too early to approve the system, not to mention expand it, since it’s only been [in effect] a year. From the start, critics of the system said it erodes freedom of speech, and those criticisms haven’t gone away. Until there is a widespread consensus that such a system is necessary, it’s too premature.” Seong said.

The KCC announced its package of new Internet regulations on July 22.

The package, which could be implemented as early as next year, includes expanding the identity verification system and shutting down sites that fail to take action against users who post libelous comments.

“Freedom should be guaranteed with a premise that people respect others’ rights,” said Im Cha-sik, the chief of the commission’s consumer and network bureau.

The new regulations have the full backing of President Lee, who has gone on record as saying he is committed to curbing the Internet’s capability of spreading what he believes to be misinformation.

“We have to guard against ‘infodemics’ that disseminate inaccurate information and prompt social unrest like epidemics,” he told the National Assembly on July 11.

No doubt at the back of Lee’s mind are the accusations that he agreed to resume U.S. beef imports at the cost of public health. The Internet was rife with comments in late spring this year that U.S. beef could cause mad cow disease.

However, the Citizens’ Coalition for Economic Justice issued a statement denouncing the new regulations, which, the coalition says, infringe Web users’ basic rights.

These rights are guaranteed by the Constitution as freedom of speech, the coalition argues.

“Disputes over the identity checking system are ongoing, with critics saying that it suppresses public discussions and hinders Internet activities and industry development. Enforcing the rule will go against the very purpose of the Internet, which is free exchange of information and opinions and could cause more side effects,” the coalition’s statement read.

One of the side effects of an expanded identity verification system could be an increased number of lawsuits, experts warn.

“Charges like contempt and defamation deal with intangible subjects such as character and fame, which are quite subjective,” cautioned Hong Seung-hee, a law professor at Won-kwang University.

“The identity verification system may be effective in tracking down offenders, but it could also be a means of damage control and lead to unnecessary lawsuits,” Hong said.

In addition, the Justice Ministry said last month that it plans to introduce what it calls a Cyber Defamation Law.

Korea has no means of effectively dealing with harmful Internet messages, according to the ministry.

That number jumped to 216,000 a year later. This jump in the number of complaints could mean that the number of lawsuits will pile up once there is a legal framework in place for processing the filed complaints.

Another issue relates to what constitutes a harmful comment on the Internet. The National Internet Development Agency of Korea, which conducted the survey on the effectiveness of the identity verification system, acknowledges the ambiguity.

“Defining whether a posting is malicious or not is not a clear-cut issue,” said Lee Hye-rim at the agency.

“Basically, we categorized messages that used swear words and inaccurate information for character attack and defamation as ‘heavy,’ and those that just used vulgar terms to mock people as ‘light.’

“There were seven to eight people involved in such a process in last year’s survey, but even among them, there were differences of opinion,” Lee said.

The agency plans to seek academic cooperation to set up more objective standards and criteria for categorizing online messages in the coming months.

But there is some consensus among a majority of Internet-related companies that there should be measures to deal with cyber-bullying.

An official with Naver, Korea’s largest portal, said the company agrees with the government that such a control is needed, but cautioned that the new regulations should respect the much-cherished values of the Internet.

An official with Daum, another major portal, said she hopes the new rules will make their work easier, as the absence of a unified system and conflicting laws make it hard to manage its site.

“What the government must remember is that checking identities online cannot be the only solution in dealing with cyber attacks,” said Kim Seong-gon of the Korea Internet Corporation Association.

“It should be done along with other offline efforts such as forums and discussions to gather opinions as well as campaigns and more education to garner public support.”


Lessons in online etiquette for a healthier cyberworld

Elementary school students will begin classes on cyber etiquette and ethics at an earlier age.

Second graders will be treated to a list of Internet dos and don’ts starting next year in a program devised by the Ministry of Education, Science and Technology.

Currently, classes on cyber behavior start in fourth grade. Schools will increase the number of textbooks dealing with Internet manners from eight to 15, the ministry says.

“Using the law might work to some degree, but it will be more effective if people learn to control themselves,” said Seong Dong-jin of the Korea Internet Corporation Association.

Meanwhile, the Grand National Party plans to start a “Blue Ribbon Campaign” from next month to promote what it calls a “healthy Internet culture” in which netizens behave themselves of their own free will.

The campaign will include an agreement between the government and civic groups, Internet companies and netizens to work together on creating a healthy Internet environment, holding promotional events and enhancing ethics education, among others.

The “Sunfull Campaign” led by a professor, a lawyer, TV celebrities and others for about a year hopes to fight malicious comments online with sunfull, loosely translated as well-intended messages.

The campaign began in March last year when Min Byeong-cheol, a liberal arts professor at Chung-Ang University, asked his students to send positive comments to people suffering from hurtful online messages. The movement has attracted academic, corporate and political circles.

“Our campaign seeks to foster Internet opinion leaders with a strong sense of ethics and responsibility,” said Lee Chang-seong at Sunfull Movement Headquarters.

In June this year, the Sunfull Movement Headquarters worked with Jeju Jungang Middle School on Jeju Island to set up Korea’s first computer room dedicated to positive cyber messages at the school.

“Some may say what we do is superficial and a mere formality. But we believe posting libelous comments is a habit and in that sense, we hope to make giving good messages a habit for our children,” Lee said.