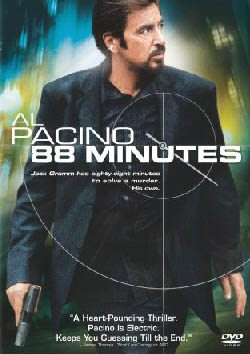 It’s just another day. Or perhaps it’s a better day because things went well between you and your date last night.

On your way to work you receive a phone call. Then you hear a disturbing computerized voice saying, “You have 88 minutes to live ... tick tick tick.”

So much for an ordinary day.

There are mainly three ways you can react to such a call. You can get annoyed and pass it off as a prank call, you can panic and be stupefied or you can fight your way to make sure that you don’t die in 88 minutes.

In “88 Minutes,” Dr. Jack Gramm (Al Pacino), a sexy womanizing forensic psychiatrist and a professor working with the FBI in Seattle, takes the third option.

Having been a victim himself in the past, Gramm “looks at everyone with the most jaundiced eye,” including the dean of the school, his students, the girl he hooked up with last night and, of course, the enemies he put away in prison with his ingenious testimonies.

The battle of the brains has begun and Gramm must fight against the clock to find the mystery caller’s identity, save his job, colleague, students and, most importantly, his life.

Considering such suspenseful circumstances, Gramm is very calm and analytical.

He questions who, where and why and starts to narrow down the possible suspects.

Pacino, “everyone’s favorite actor,” masters the part of Dr. Gramm multidimensionally - sometimes being the seductive Mr. Suave, the cool but demanding professor at a university, a middle-aged man running desperately to save some time and a forensic psychiatrist shrewdly solving each puzzle piece.

Even though such a great actor is playing a role in a well-written thriller script, my heart doesn’t applaud the movie.

Maybe it’s the little glitches in the scenes that hint too much, or the stressful psychological factor throughout the movie.

I’m not a big fan when it comes to psychological movies - they linger and bother me after the movie finishes.

88 Minutes deals with a psychopathic serial killer who commits horrible crimes against women with the same modus operandi. Every word coming from his mouth and his distasteful look made my stomach sick.

And I cringed every time Gramm’s cell phone rang at the thought of hearing that disturbing voice, reminding him of the minutes he’s got left to live.

Then again, I don’t think anyone could do a better job than Pacino’s Gramm under such pressure.

What would you do, if you picked up your cell one day and heard, “You have 88 minutes to live... tick tick.”