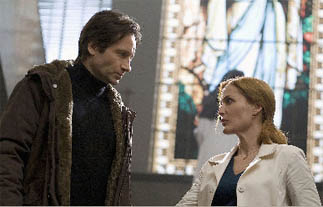 Six years have passed since the season finale of “The X-Files,” the American TV series on paranormal phenomena. But it appears X-philes - rabid fans of the show - and its creator Chris Carter didn’t get enough of maverick FBI agent Fox Mulder (David Duchovny) and his skeptical partner Dana Scully (Gillian Anderson) while it was on the air.

Thankfully, the second feature-length film of the series, “The X-Files: I Want to Believe,” is clear enough for those new to the agents’ paranormal activities to understand, but at a price.

Carter, who takes the reins as director and co-writer (along with Frank Spotnitz), is guilty of clumsily shoehorning exposition of backstory into the film. After nearly a decade on TV, Mulder and Scully both have deep, intertwined histories that just sound cheap when reduced to a few lines.

The two FBI agents, who worked together on unsolved, inexplicably strange cases, have survived alien abduction, sleeping together and secret state sabotage. So it sounds a bit awkward when exchanges like the following occur:

Mulder: What are you thinking about?

At this point, Mulder and Scully, presumably several years after the season finale, are both inactive agents and living together.

Scully is a relentlessly hardworking doctor at a Catholic hospital. Mulder, wanted by the FBI, is at his old hobby of clipping articles about Area 51 and the like in his quest for the truth - which, of course, “is out there.”

The FBI, apparently in the dark about the lovers’ cohabitation, finds Scully at work in efforts to contact Mulder. Despite Mulder’s past (or rather, because of it), the FBI needs his help to track down a missing female agent.

Thus, Mulder and the more reluctant Scully are thrust into a search for the agent, in which the only promising lead is a pedophile priest, Father Joe (Billy Connolly).

While Mulder believes Father Joe’s “visions” of clues leading to the missing agent and follows him earnestly, Scully, as always, has her reservations.

As a Catholic, albeit nonpracticing, Scully finds her faith challenged repeatedly through the FBI ordeal and in her professional life as a physician. In one scene, Scully sucks up her pride and judgment to question Father Joe, only to erupt in an outburst when he quotes Scripture.

Although Mulder is the one who “wants to believe,” as the film’s subtitle and the character’s famous poster suggest, it’s Scully’s belief that’s the focus of the film.

The mystery aspects of the film (and a villain who closely resembles Sloth from “The Goonies”) keep this X-Files sequel from descending into the uninteresting realm, but unfortunately, the film’s ultimate purpose seemed more to allow X-philes to geek out at Mulder and Scully’s love out in the open.

But as many lovers have learned, the chase is generally more fun than the catch, and that’s certainly true for the audience. Mulder and Scully are more interesting when their love is bubbling under the surface, not when they’re wrapped in matching sheets.

The X-Files: I Want to Believe