Art for life in tranquil Buam-dong

Art for life in tranquil Buam-dong 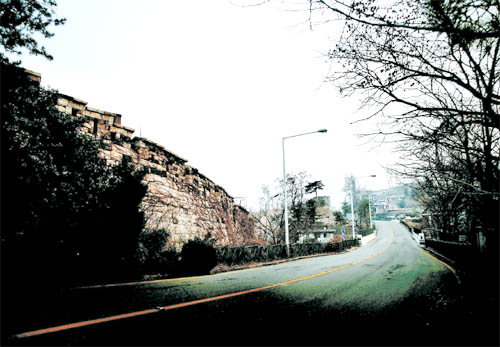 A walk through Buam-dong invites visitors into some of the hidden historical treasures of the capital, including Seoul Fortress. [JoongAng Ilbo]

Ever since the hit Korean TV drama “Coffee Prince” ran here last year, the mentality of younger Koreans has begun to show some notable changes. One significant move is their fashion code seems to have shifted from luxury to taste-oriented, from flashy to more subdued.

When it comes to the physical setting, Buam-dong, a neighborhood in northern Seoul where part of the popular drama was actually shot, encapsulates this phenomenon. The area is defined by its green trees and historical assets like an ancient fortress, old rocks and ravines. The restaurants have fewer tables and the galleries don’t have attendants.

The interior of Art for Life in Buam-dong.

One cafe owner even leaves the shop once he serves your coffee. Yoo Jong-guk, the cafe owner of Noranjip, who settled in Buam-dong after living in Tokyo for many years, recently closed his shop temporarily and went on a summer retreat to Mount Jiri in the south of the country. He will be collecting herbs for his store. 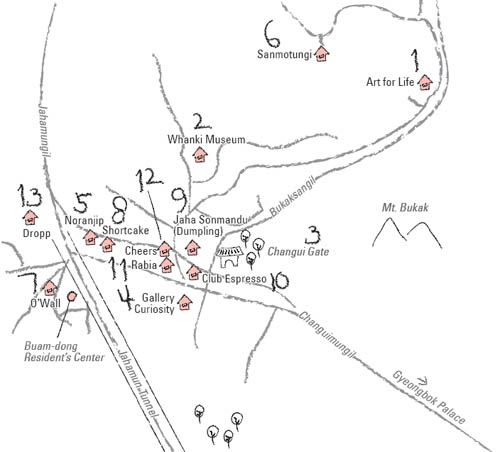 “There’s a real sense of community here,” says Seo Yeon-hee, a jewelry designer who moved here from Insa-dong last year. “The place is still too quiet for a serious business, but many shopowners want the neighborhood as it is.”

The neighborhood’s remoteness is due in part to the lack of public transportation. A few buses pass through here, but the closest subway station (Gyeongbokgung, line No. 3) is still a good ten-minute drive away. Yet on weekends you spot a noticeably larger crowd in Buam-dong, especially since part of Seoul Fortress reopened last year after being closed for decades due to military security

Why? The attractions are clear. The area hardly feels like Seoul, but part of Buam-dong’s charm is that it’s got urban characters who are quintessentially Seoul.

Art for Life is an Italian restaurant and concert house run by a Korean flutist-oboist couple. The two quit their cushy jobs as leading musicians with the Seoul Philharmonic Orchestra and opened this place five years ago in a remote hanok, or traditional Korean house, about a 15 minute’s walk from Club Espresso.

The walk is an artful journey, a quiet trail reminiscent of a countryside town, passing small farms and old-style houses. Every Saturday at 5 p.m. the house throws classical music and jazz concerts and other musical styles.

In August, the tenor Park Seung-hui with an ensemble of fellow musicians performed a series of concerts there.

But the real fun is when the concert is over. Once the official program ends, the off-stage concert springs into life with veteran musicians playing pop. Seats are limited to 60, and reservations are mandatory.

Programs for the fall include a soprano, a classical guitarist and pianists.

An Italian dinner and concert set is 70,000 won ($67.34). Part of the money goes to supporting a charity and two young baritones handpicked by the owners.

The restaurant offers pasta as a main specialty using homemade cheese, but as an unusual treat, it’s also got organic herbal tea brewed from plants raised at the Benedictine Abbey on the outskirts of Daegu.

Kim Whan-ki is a first-generation modern Korean abstract painter who studied in Japan before he joined the local avant-garde movement.

He concentrated on abstract paintings inspired by mountains, rivers and traditional white porcelain. During his years in Paris, he focused on traditional wall decorations and plums inspired from Korean landscapes.

In the ’60s, he moved to New York, producing his famous dot painting. In 1963, he represented Korea at the seventh Sao Paulo Biennale in Brazil. The museum, which opened in 1992, a year after the artist’s death, was designed by a Korean-American architect inspired by the curves in Kim’s works.

The museum houses a library, an art shop and a cafe that looks over a pleasant view of the backyard. Normally, Whanki displays artists of all media whose works have been influenced by Kim.

But “The Story of the Sun, the Moon and the Stars,” the current exhibition, features Kim’s works before he moved to New York, including his moon jar and character paintings and letters he sent his family and friends.

Changui Gate, one of the four main gates of Seoul, is the entrance to Seoul Fortress. It’s the smallest of the city’s four main gates, which were built in 1396 during the fifth year of King Taejo’s reign.

Originally, the gate led to the northern side of Seoul, but was closed after feng-shui experts insisted that traffic through the gate might harm the king.

The gate has eclectic ornaments that have historical significance, such as a sculpture of a bird, originally a rooster, which was replaced with a phoenix because the gate’s surrounding landscape was in the shape of a centipede. The rooster is an enemy of centipedes according to traditional fortune telling.

The Korean name of this gallery, which roughly translates to “Being Responsible for Your Curiosity” is a hip, alternative space which normally offers catchy titles and explanations of its exhibitions.

The gallery’s name is telling. From the outside, the place is deliberately mysterious. It triggers your curiosity, compelling you to go inside and find out more.

The name also plays with the idea of visual art, which questions ideas triggered by your curiosity.

Recently, the gallery featured a show called “My First Love.” It invited a group of Korean artists to delve into memories about their first loves through a series of sketches, paintings and writings.

The gallery, run by a designer-photographer who graduated from the Pratt Institute in New York, succeeded in their randomness of location.

Contemporary art was the last thing the residents could embrace in this old-fashioned side of Seoul. But it also helped that the space doesn’t have any attendants watching the visitors or explaining about the exhibition.

During a collaborative show between a Korean photographer and North Korean painter a little while ago, local policemen surrounded the gallery after the residents called the police.

Apparently, there was a portrait of the North Korean leader Kim Jong-il hanging on the gallery wall.

Noranjip, which means “yellow house” in Korea, typifies the character of Buam-dong. There’s no signboard outside and the cafe is simply identified by its painted door frames.

To visit, you have to call the owner first and book a seat. If you think this is too much hassle, think again. Once the customers arrive, the owner Yoo Jong-guk opens the door, serves coffee then disappears until the guests leave.

The cafe is so small that Yoo thinks he could listen to his patrons’ conversations. It serves coffee brewed from beans by Beautiful Coffee, a local foundation that imports fair trade coffee beans from Nepal and Peru.

This coffee house, which literally means “corner of a mountain,” is located about 300 meters from the entrance of the main alley in Buam-dong.

The place became a popular spot among younger Koreans after featuring as a setting for the hit TV drama “Coffee Prince Branch No. 1” as a house for one of the male leads.

As a trademark, it features a yellow Volks-wagen in the yard.

This cozy Italian restaurant was opened by the chef-owner of Italian Kitchen in downtown Seoul to avoid the crowds. The menu ranges from steak to pasta and Korean-styled pancakes at inexpensive prices.

The shop, opened by a designer couple from Dongdaemun, specializes in home accessories imported from Japan. It houses vintage toys, cookie cutters, adorable keychains and paper dolls for light gifts.

This handmade dumpling place has been around for 14 years. It’s known for simple dishes using dumplings and rice cakes. Their trademark summer menu includes cold noodles in finely crushed beans and pyeonsu, a vegetarian dumpling stuffed with shiitake mushrooms and cucumber.

This is one of the oldest espresso places in Seoul. It served gourmet coffee and house-roasted beans way before this neighborhood was in vogue. Having given itself the nickname “an urban lodge,” the place has the feel of a lodge in the middle of a mountain. In winter, you see people wrapped in blankets near a fireplace. All the beans are roasted in the cafe, and fresh coffee beans from Germany are on sale.

The owner of Rabia, which means “spring” in Arabic, opened this pasta restaurant last year on his daughters’ recommendations. The drawings on the walls were painted by the owner’s wife, and the menu carries homemade Italian dishes.

Next door to Rabia is Cheers, a beer joint that made a name for itself through its house-marinated fried chicken. The chicken set comes with soft drinks, a wholesome plate of chicken and French fries.

Dropp is an organic coffee shop specializing in filter coffee. The cafe uses about 11 kinds of beans; if you pay an additional 1,000 won, the barista serves you a different type. You could also choose up to three different beans and blend it on site for your own drink.