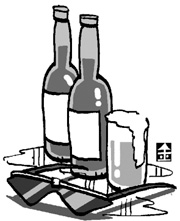 Have you ever wondered why beer was the prevalent drink in Europe and tea the drink of choice in Asian countries? The reasons behind this are both cultural and hygienic.

There is an old adage, “The water can kill you but the beer won’t.” People in the West hadn’t discovered that boiling water would purify it. However, they knew from experience that drinking beer instead of water would prevent diseases, thanks to alcohol’s sterilizing power.

The ancient Chinese governed by legendary ruler Shen Nung were definitely ahead of Europe. The emperor, known for his scientific wisdom, believed that the safest way to drink water was by first boiling it.

One day the emperor mistakenly ate a poisonous plant, which left him writhing in pain. Noticing that some dried leaves from a nearby bush had fallen into the boiling water, he decided to drink some and found it to be very refreshing. And so, tea was created.

Many people believe that Asians have low tolerance for alcohol, which leads them to drink more green tea than alcohol. They also suspect that Asians drink less alcohol than Europeans because they have an alcohol dehydrogenase (ADH) deficiency.

The truth is that nearly half of the people in Northeast Asian nations, such as Korea, China and Japan, are equipped with this enzyme. ADH is responsible for catalyzing alcohol into acetaldehyde - the chemical that causes hangovers. What they lack, however, is aldehyde dehydrogenase 2, the enzyme associated with the chemical transformation from acetaldehyde to harmless acetic acid. Less than 50 percent of the Asian population possesses normal ALDH2. Accordingly, Asians tend to accumulate a higher degree of acetaldehyde in their body for a much longer period of time.

Most people know about the damage heavy drinking can inflict on the body and the mind. It can even produce what is jokingly referred to as “beer goggles,” when the “wearer’s” vision of reality is severely distorted by alcohol.

This effect was scientifically confirmed by boffins at Bristol University in England. They conducted an experiment on 84 young people, getting half of them tipsy, and then asking all of them to rate the attractiveness of 40 people in photographs. Ultimately, the inebriated rated those in the photos as more attractive than did those who were sober.

Alcohol can serve as an aphrodisiac, although if drunk to excess, it may result in impotence.

So don’t let alcohol let you do something you will regret later.