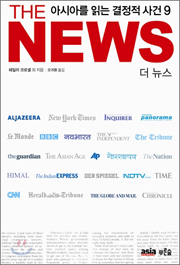 People are skeptical of the news these days. Information overflow exists everywhere and the Internet has made it possible for even kids to become news makers.

To make matters worse, an ideological confrontation among different forms of media has resulted in a tit-for-tat media war in the form of distorted reports, bringing down the reliability of the news. Yet, the fact that this book has “The News” as its title demonstrates the confidence of its authors.

Going straight to the conclusion, this book lives up to its name. This is the story of nine reporters working in countries such as Nepal, Indonesia, Cambodia and Thailand.

Articles written by these reporters forced a corrupt president to flee the Philippines. Another about India foresaw the Bhopal gas leak that killed 15,000 deaths.

Among the writers, an Indonesian reporter jailed for two years for criticizing the government still had the guts to interview famous inmates and then turned the reporting into a scoop.

There is also a story about a reporter whose stories about the Nepalese royal family massacre in 2001 were noted for their lack of sensationalism and balance, the authors argue.

These news reports, the authors add, were at a higher standard compared to today’s articles in terms of diligence and objectivity.

In their behind-the-scene stories, we can see the present picture of Asia.

For instance, former Filipino President Joseph Estrada, who came into power in 1998, is a prototypically corrupt leader, the authors write. A former movie star, Estrada said at his inauguration ceremony that “being a president is going to be the best performance of my life.”

It was the Philippine Center for Investigative Journalism, known as “female warriors with a pen” who disclosed the truth.

Thanks to their articles, people took to the streets and rallied against the president, forcing him to step down.

In addition, the authors try to show how the Western media exploits Asian reporters. There’s a story about how The New York Times begged a cub reporter from India for help and cast him aside once they were done taking advantage of him.

The authors also show an unknown side of Osama bin Laden that the authors say cannot be seen in the Western media because the reporters don’t have the access.

For example, the bin Laden joke, “I have three wives but I do not remember how many children I have” is unlikely to appear in The New York Times.

Those who trust big names such as The New York Times even when it came to coverage in Asia might feel ashamed after reading this book. It reveals the embedded Western hegemony and bias against Asia, the authors say.