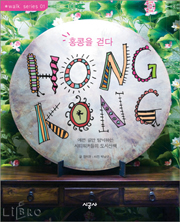 “Walk through Hong Kong” is a newly released Korean guidebook for travelers to Hong Kong. It’s an interesting read, both practically and anthropologically, introducing shops, restaurants, streets and historical spots around the city.

The idea is to explore the city streets on foot, embracing the hidden treasures and idiosyncrasies of your journey.

The result is refreshing; the book taps into places that are rarely mentioned in other guidebooks, such as the concerts held in private mansions and street joints found by accident.

Instead of the posh Hyatt or Four Seasons, the book selects Lanson Place and Jia, a stylish boutique hotel designed by Philippe Starck, and a humble teahouse on Canton Road replaces Maxim’s Palace, the city’s giant dim sum place that’s listed in every Hong Kong guidebook.

The book matches substance and details with delicious descriptions of the city. While guidebooks that focus on gourmet and shopping have been in vogue for some years, the book makes you want to catch the next flight to Hong Kong.