Tool complex in Guro is a Mr. Fix It paradise

Tool complex in Guro is a Mr. Fix It paradise 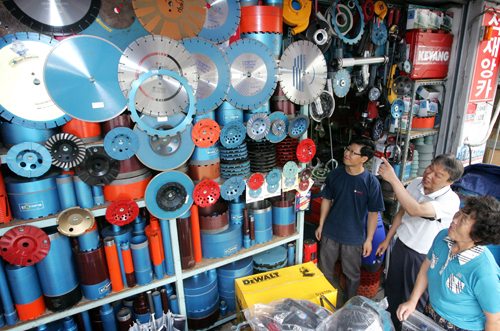 Customers look at steel disks and other tools in a store in the Seoul Guro Industrial Tools Commercial Complex. The complex has over 1,770 stores selling hardware ranging from bolts to power drills and monkey wrenches. By Oh Sang-min


Just across from Guro Station are lines of red brick buildings no more than three stories high. Within them are shops piled high with hardware ranging from the tiniest nuts, bolts, cutting knives and power drills to massive industrial water pumps, grass cutters and so forth.

On a recent weekday, Park Chul-min, 34, was shopping there for a power drill.

Park said his hobby is making large plastic models of tanks, battle cruisers and such.

“I don’t come here often because you really don’t need huge tools unless it’s your job,” he said. “But when I need items like small bolts, I come here because they’ve got everything.

“What’s more, you get a good-quality product for a good price.”

The Seoul Industrial Tools Commercial Complex is far from high-tech. Along the streets are piles of heavy tools, and steel bars are packed into individual shops of around 33 square meters (355 square feet) each.

Trucks, cars and even forklifts are parked at every corner in the streets that run between the buildings.

The streets are dark and the buildings are rough. Hardware are hardly flashy; neither are men with tools.

But the complex, which is primarily a wholesale provider of hardware, is famous for having the needed tools, no matter what you’re building.

“You could practically build a plane with the tools that are concentrated at this complex,” said Chai Sang-hyun, head of the Seoul Industrial Tools Commercial Association.

Bae Jae-man, president of Jeongeun Precision, has been a faithful client of Geumyong Corp., a store within the complex, which has been there for over 20 years. “The Guro complex is geographically close to my factory in Yeongdeungpo District,” said Bae. “Moreover, the products that Geumyong offers are high in quality and low in cost.”

He said he visits the Guro hardware complex at least once a month to get tools for his factory.

From time to time, though, he also shops in other tool stores, including the ones concentrated near Cheonggye Stream. “Sometimes there are tools that you can’t find at Guro so I travel downtown,” Bae said.

However, he said some other stores hike up the prices. “Those are the stores that look at you as a one-time customer.”

The hardware complex at Guro was opened in 1981. It was the first such commercial complex in Korea and was established not by the government but by store owners themselves.

“It all started with eight tool store owners in Yeongdeungpo District in the early 1970s,” said Kim Yong-mahn, former president of Geumyong Corp., a store that sells steel cutters. Kim said owners wanted to open a market of their own since rent was high.

“We started to save our money and put it into a joint account,” Kim recalled.

The money grew, but the owners wanted more people to participate to improve their financing. They started sending out newspaper advertisements and promotional leaflets that spread even to Cheonggye Stream.

In less than a decade, the store owners, with the help of the Seoul Metropolitan Government, were finally able to purchase a lot in Guro.

“Guro was the perfect spot to build the complex,” said Chai, president of the industrial tool association, which oversees and manages the complex.

“It was at the center of several crossroads, and there were large numbers of factories that were major clients for the stores within the complex,” Chai said.

Today there are more than 1,770 stores spread over four city blocks. According to the association, the total number of shops is slightly over 1,900, including restaurants, small mom-and-pop stores and other service shops.

“The complex is designed in a way that is perfect for hardware stores to do business,” said Chai. “People can shop without having to get out of their cars, and that is important for this complex, considering that the products sold here weigh quite a lot.”

Potential customers can drive by shops and examine merchandise, loading items into their cars if they decide to buy. Chai said many Chinese officials have visited the complex to adopt its design.

“Since it is good the way it is, we currently have no plans to remodel, rebuild or even expand,” Chai said.

But the complex is not immune from the current economic malaise.

Many factories in the area have long packed up and moved out as Guro has changed from an industrial neighborhood to a center for high-tech industries since the early 2000s.

The white-haired owner has been selling steel cutters for nearly three decades in the same spot since the complex opened.

“In the ’70s and ’80s, every corner was just packed with customers and vehicles,” Kim recalled. “You couldn’t find room to move around.”

Business turned sour in October 2002 and has remained that way for years, Kim continued. “Many of our clients, which were small and midsized companies, have either shut down or moved to other countries like China,” Kim said.

Kim said he retired in the early 2000s and handed the store to his unwilling son, Kim Han-sueng.

“I was planning to open a small office on the second floor and spend the day drinking soju and spending time with friends,” the senior Kim said.

But the current business environment means he has to keep working, Kim added. One of his jobs is to sit at his desk minding the store while his son goes out to deliver goods to clients.

Chai agrees that as many smaller businesses have moved outside the Seoul metropolitan area, the cost of delivering goods has become a burden.

But, he says, despite the current hardships, he’s optimistic about the complex’s future.

For oldtimers like Kim and Chai, the hardware-filled streets have been home for nearly three decades.